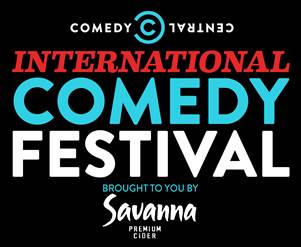 Funny, fearless and original, SA’s first Comedy Central International Comedy Festival will bring African and international comedy stars together under one roof for a hilarious, world-class celebration of comedy genius.

With its charismatic appeal and avid support of stand-up comedy, Savanna Premium Cider is the perfect partner for this ground-breaking Festival.

Trevor Noah, fresh from his hosting duties at The Daily Show, will kick off the Festival with gala performances of his upcoming SA tour, NationWild, at The Globe (26-28 November), while US stand-up legend and Comedy Central “Roastmaster General” Jeff Ross will make his first ever trip to South Africa to head The Roast Gala (Friday 4 December). Batting for the home team, SA comedy favourite Schalk Bezuidenhout will feature in The Afrikaans Comedy Show (Saturday 5 December).

Commented Trevor Noah, ‘It’s always so much fun performing with this many amazing comedians and Comedy Central Africa has done an amazing job of putting on this world-class festival.”

Quipped Jeff Ross, “I’m so excited to be performing in South Africa for the first time that not even the vuvuzelas can drown me out.”

In honour of the thriving SA comedy scene, The Comedy Central International Comedy Festival puts SA comedians front and centre stage, appearing alongside the international comedians at the gala performances, and featuring in multiple themed events including an Afrikaans comedy special, and a dedicated “’Vernac” show. Goliath & Goliath will stage The Goliath Comedy Experience as part of the Festival.

Representing the continent’s comedy talent, Nigerian superstar Basketmouth will also bring his own distinctive brand of funny to the Festival in the form of a star-packed Best of Africa comedy showcase that promises to emulate the success of his latest comedy spectacular “Comedy Central Presents Lord of the Ribs”. Ugandan comedian Salvador will join the line-up. More comedians will be announced at a later date.

Designed to empower and uplift South African comedy and comedians, the Comedy Central International Comedy Festival will also include a series of workshops and master-classes by comedians, promoters and specialists, helping comedians to hone and develop their craft.

Added Evert van der Veer, Head of Comedy Central, Africa, “We are delighted to fulfil a long-held Comedy Central ambition to create an international festival here in Johannesburg that celebrates and highlights the vibrancy of the SA comedy scene – both now and for years to come. Attracting comedy fans from all over the world to enjoy a fabulous line-up of international and African comedy, The Comedy Central International Comedy Festival not only provides hilarious entertainment for comedy fans and TV viewers, but also performs a perfect double whammy by simultaneously uplifting and rewarding the local comedy industry.”

“In the sharp-witted world of Savanna, with its signature dry take on intelligent humour, bringing these giants of local and international comedy together is a triumph for us,” says Marcel Swain, Savanna SA Marketing Manager. “Since its launch in 1996, Savanna has always been an ardent supporter of comedy not just through the maverick characters in our iconic TV advertisements, but also by supporting comedy festivals and shows in all their guises throughout the country. We are especially excited to part of the first truly international comedy festival in South Africa – a first for the country and both brands.”

Tickets for The Comedy Central International Comedy Festival go on sale at Computicket from Tuesday 6 October priced from R120 to R650.

The Comedy Central International Comedy Festival Brought to you by Savanna is executive produced by Comedy Central (Africa) in association with Creative Director and renowned South African comedy producer and entrepreneur Ryan Harduth.

About Savanna
Savanna Premium Cider is an all-South African 100% clear apple cider with a distinctive dry taste and left-of-centre attitude sold in over 40 countries. Strutting a bold new look and dashing frame, Savanna has just undergone a major makeover with a completely new, uniquely shaped glass bottle, the first change since the brand was launched in 1996. Savanna is widely known for its charismatic appeal and dry take on humour and is a proud supporter of the South African comedy scene. It is served traditionally with a wedge of lemon in the neck. Savanna Dry, Light and Dark are available country-wide in pubs, restaurants, supermarkets, liquor stores and clubs. Savanna. It’s dry. But you can drink it.

About Orange Babies
Orange Babies South Africa is part of the Dutch Orange Babies charitable foundation or NGO, organised around a single purpose and driven by unfailing hope. Our purpose is to transform the lives of women and children infected and affected by HIV/ AIDS in Southern Africa. Our NGO’s ultimate hope is to help achieve an HIV-free generation. Since 1999, Orange Babies has translated this hope into saving thousands of lives. We have also assisted in drastically improving the quality of life for scores of others. This has been achieved by partnering with, and providing financial support to, carefully selected organisations in South Africa, Namibia and Zambia that directly assist the most vulnerable communities in these countries. www.orangebabies.org.za.

About ROCKSTART
ROCKSTART is non-profit organization which launched a pilot programme in 2012 with an aim to bridge the divide between the untapped potential of young people and the business challenge of finding, educating and keeping the best talent. As part of its program, it offers students a full scholarship, a chance to interact with industry greats, life skills and coaching. Above all, it engages the students with real life brands and get them working on live brand problems before they graduate, giving them an upper hand over their peers. Its curriculum covers all aspects of media and advertising, with opportunities to work for the likes of Ogilvy & Mather, GSK, Viacom and other industry heavy weights.