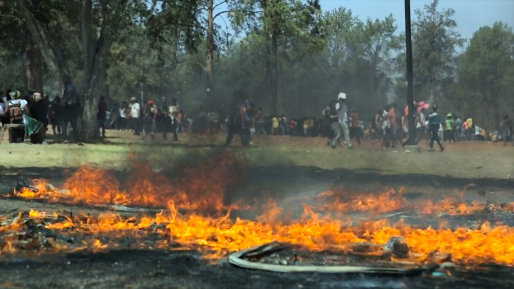 Post-Apartheid South Africa in the Dock?

Johannesburg, 14 April 2016: To some people, the defining image of contemporary South Africa has changed – it’s no longer of Nobel Prize winners Nelson Mandela or Desmond Tutu; it is of students with their hands in the air in protest, surrounded by flames, riot police…

Commissioned by Africa’s leading youth brands MTV (DStv channel 130) and MTV Base (DStv channel 322), and directed by South African documentary maker Lebogang Rasethaba, The People vs The Rainbow Nation goes behind the headlines and the news footage to investigate what has driven this post-Apartheid generation to mobilise mass action campaigns #rhodesmustfall and #feesmustfall, asking why South African youth believe the struggle is far from over, more than 20 years after South Africa’s first democratic elections.

Commented Dillon Khan, Head of MTV, Africa “The People vs the Rainbow Nation follows the contrasting lives of students of different ethnicities from four different South African universities in Cape Town, Johannesburg, Stellenbosch and Pretoria, asking if equal rights have meant equality, and whether the promise of the Rainbow Nation is still alive and kicking, or if the dream is tarnished beyond repair.”

Talking about his goals in making the documentary, Lebogang Rasethaba commented, “We think it’s important to have a film that will help the future generations navigate the various manifestations of power in society with a lot more clarity and insight; that’s what the film is really striving to do. We wanted to make a film that we wished someone had made when we were young to help us make sense of the construct of society, how to engage the systems of power at play and where we as individuals fit in in all of this.”

Among the explosive statements expressed by young people during the documentary are:

“We talk about ’94 as this momentous point in our country’s history, but we didn’t change anything, really, structurally and institutionally – we just… added blacks.” Gugulethu Mhlungu (27), Lifestyle Editor, City Press, Radio 702, Cape Talk

The People versus the Rainbow Nation is a film directed by Lebogang Rasethaba and produced by Allison Swank of Arcade Content on behalf of MTV.

About Lebogang Rasethaba
Lebogang Rasethaba is the only South African with a master’s in film studies from China and a handy fluency in Mandarin. Get Over It?!?!? is Lebo’s third full-length documentary, following on from Future Sound of Mzansi (co-directed with Spoek Mathambo) and Prisoner 46764: The Untold Story of Andrew Mlangeni. The co-founder of Arcade Content, Lebo’s documentaries, music videos and brand films have been featured everywhere from HighSnobiety to Nowness, from i-D to Vice.

Allison Swank
American Allison Swank graduated from The University of Cape Town with a Master’s in African Studies that questioned the continent’s representation in Hollywood in films like The Last King of Scotland and Blood Diamond. After writing for Africa is a Country and working at CBS, Allison became the founding content manager at Okayafrica, launched by The Roots’ Questlove. Later, as the head of video there and sister channel Okayplayer, she filmed with everyone from Erykah Badu to Elvis Costello to The Very Best, and produced the Fela Flex series in partnership with NOWNESS. Now based in Johannesburg, Allison produces documentaries, music videos and brand films with director Lebogang Rasethaba at Arcade Content.