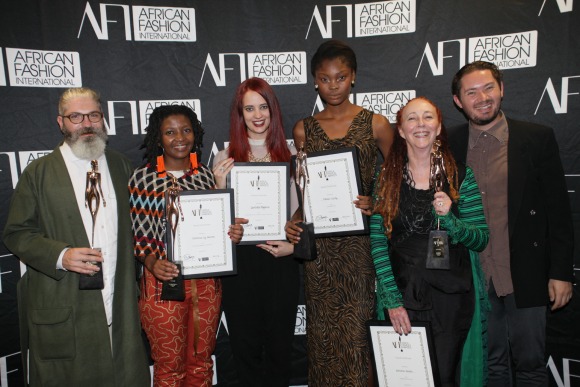 “The Africa Fashion Awards are always a reflection of the growing excellence of the continent’s fashion industry. AFI is proud to continue to recognise the stellar talents that are moving this African fashion forward by providing a platform on which to celebrate them” says AFI Group Marketing Manager, Sizwe Nzimande.

The title of Designer of the Year went to critically acclaimed, multi-award-winning fashion stalwart, Marianne Fassler (South Africa), for her continued capacity to surprise and delight after over two decades in the industry; whilst Katherine-Mary Pichulik (South Africa) took the title of Accessory Designer of the year for Pichulik, a bespoke label of hand-crafted neckpieces accessories.

In addition, another three special awards (each judged by their own, separate panel of experts) were made on the night:

The title of New Face of the Year was bestowed on Nigeria’s Next Supermodel 2011, Lucky Favour, by MBFWAfrica 2014 show producers, Deon Redman, Mary Reynolds and Jan Malan, who were best able to make the award, based on their close contact with the models.

Finally, AFI Executive Chairperson, Dr Precious Moloi-Motsepe personally recognised Vogue Italia editor-in-chief, Franca Sozzani, for her significant involvement in promoting and developing the continent’s fashion industry, on the global stage – by spotlighting African designers, models and culture – and presented her with the award for Global Contribution to the Promotion and Development of African Fashion.

Ladies and gentlemen that's a wrap! Thank you for joining us at #MBFWAfrica – Africa's finest showcase.