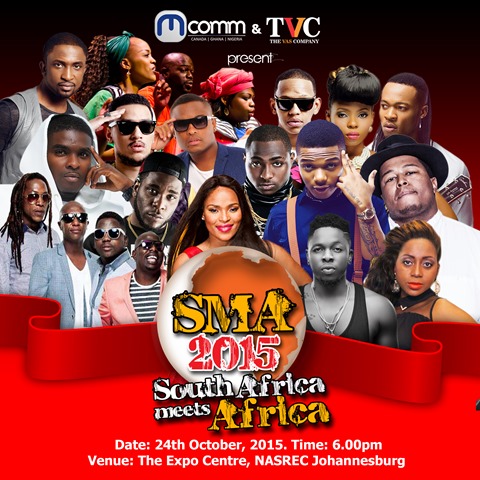 Johannesburg, SA – The first annual African Music concert set to take place on Saturday 24th October 2015 was renamed and reloaded with an even bigger line-up.

With just under 18 days left before the unforgettable take-over of the city, planning is well underway. From showcasing 20 of the biggest African headliners, the festival promises festivities and celebrations at this 10 hour concert. Doors open at 5pm with the first act onstage at 6pm kicking off this unforgettable experience. African merchandise, food and drink will be sold on site to add to the festival feel.

The African Music Concert 2015 will feature African royalty Wizkid, AKA, Davido and KO, Nigeria giants Flavour and Burna Boy, SA’s own Bucie and Uhuru. Leaders of the new school Da Les, Emmy Gee, Runtown, producer extraordinaire Anatii will also headline. World renowned Soweto Gospel Choir will add the twist to the lineup singing with Darey, the first Project Fame Africa Winner in SA; while the super fly female talents, Dama Do Bling, Vanessa Madee and Victoria Kimani are ready to show the guys that they rule.

This inaugural concert that was created in honour of uniting all Africans will take place in Joburg and will move to different countries across the globe over the next 5 years.

All you have to do is turn up! AMC 2015 is sure to be the best thing Africa has to offer musically this year.

Tickets on sale now at Computicket.