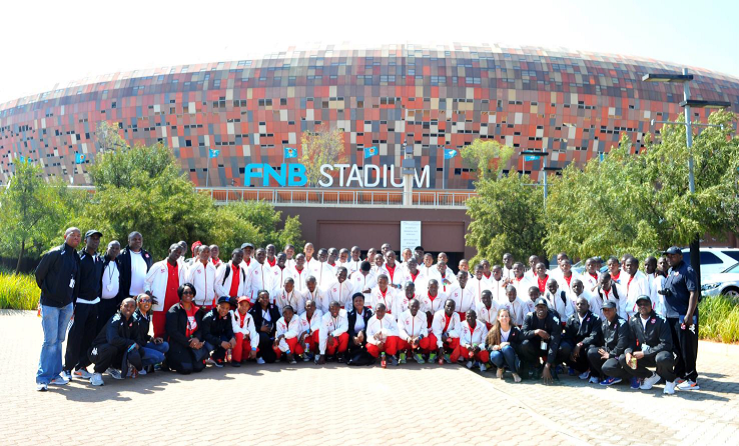 Last week, 67 talented teens from seven Southern African nations arrived in Pretoria and united to play in a week of football at the Copa SABU camp. Forgetting what makes them different – age, nationality, language, culture and background – these teens were given an opportunity to celebrate their commonality – their love of the game.

The Copa SABU camp is the culmination of the greater Copa Coca-Cola initiative – the world’s largest grassroots football programme which unites more than 1 million teens in over 60 countries. Held at the High Performance Centre in Pretoria, each team at the camp earned its right to be there by winning its respective country’s 2015 Copa Coca-Cola tournament.

Players from South Africa, Botswana, Malawi, Zambia, Zimbabwe, Lesotho and Swaziland, gathered on South African soil to make new friends, embrace diversity and have some fun. The week was filled with soccer tricks, coaching, a trip to Soccer City, a round-robin tournament and even a special visit from the renowned Bafana Bafana coach and captain duo, Clive Barker and Lucas Radebe.

Clive and Lucas took part in the boot swap event, an ice-breaker which saw each boy receive a shoebox with either two left or two right soccer boots. They were then tasked to find the boy with the matching pair, team up and create a slick soccer move. Despite language barriers, age differences and cultural gaps, these boys showcased an array of talented tricks, united in their love of the game. Under the guidance of Lucas and Clive, the best eleven were then filmed and documented as the “11 Moves for Unity”.

“The Copa SABU camp is more than a week of football. It’s an opportunity for these teens to pursue their football dream, and in the process, come together to make new friends and learn what it takes to be part of a diverse team” says Malefetsane Mbele, Senior Communications Manager of Brand Experience at Coca-Cola South Africa.

“At the end of the day, we are more alike than we think and it’s our shared passion for football that allows the sport to transcend all cultural, language and race barriers.”

For more information and to watch Lucas and Clive work their magic with the boys, click here https://www.youtube.com/watch?v=RWtVAGU8pbA.