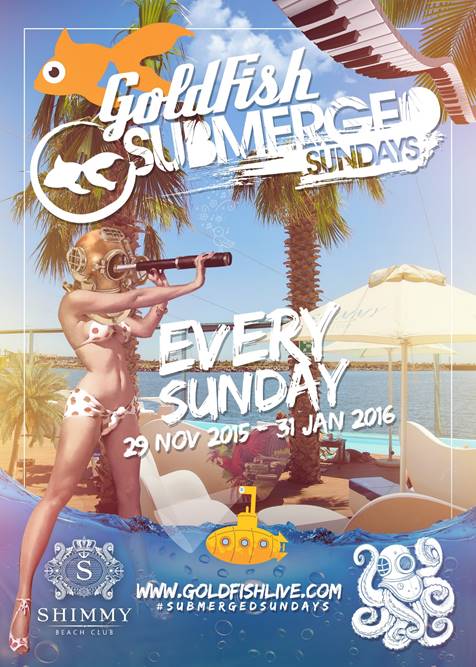 From their small beginnings as UCT music students, surfing the beaches of Cape Town, Dom and Dave have gone on to become one of the most original and successful live electronic duos in recent times – releasing multiple award-winning albums and masterminding a live DJ show that sees them spend most of their schedule touring internationally, performing to sell-out crowds.

“It’s all about live instruments“, says Dominic Peters. “Dave plays the saxophone and flute while I play electric double bass and keyboards. We mix this with dance beats, remix our tracks on the fly… basically we go nuts for the duration of the show… people have called us the re-invention of the DJ, which is a pretty apt description.”

Goldfish Submerged Sundays are to take place on 29 November 2015; 6, 13, 20, 27 December 2015 and 3, 10, 17, 24 and 31 January 2016. Goldfish will be joined each week by a line-up of international as well as top South African DJ’s with the opening night featuring German dance sensation Stimming. Tickets to these shows can be bought on NuTickets (afterhours.nutickets.co.za) – General tickets start at R100 and VIP tickets are being sold for R250.

VIP table bookings can be made by emailing info@shimmybeachclub.co.za or by calling 021 200 7778.

The closest parking lot to Shimmy Beach Club is at The Clock Tower, V & A Waterfront, with Shimmy shuttles running frequently between there and the venue. It is however encouraged that partygoers make use of UBER’s private drivers.

About Shimmy Beach Club
Shimmy Beach Club is South Africa’s premier lifestyle destination venue. Guests dine in a spectacular beachfront setting, idling away the hours in exclusive lounges, decks, VIP areas and a restaurant, with Table Mountain as a backdrop. Voted one of the world’s top ten beach venues, Shimmy is the perfect place for everything from a simple family get-together, to exclusive conferences and elaborate events, owing to its clever layout and versatile decks, breakaway rooms and lounges. During Shimmy’s summer campaign, “Summer Calling” weekends are filled with top DJ’s creating the best parties in Cape Town. Download the Shimmy App. www.shimmybeachclub.co.za