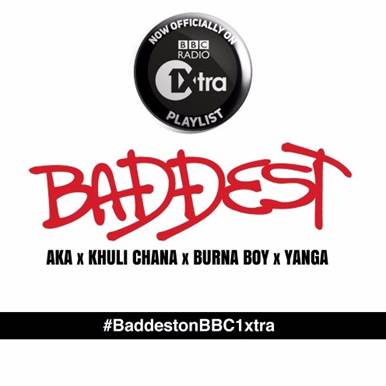 Johannesburg, Tuesday, 15 December 2015 – The #3RDWRLDBOSS, #SUPAMEGA, AKA, has received his second BBC 1Xtra play listing for his single #Baddest which is a first for South African music. AKA’s #Baddest features Burna Boy, Khuli Chana and Yanga. AKA’s #AllEyesOnMe featuring Burna Boy, Da L.E.S and JR, was his first single to get play listed on BBC 1Xtra earlier this year and to get a second single on rotation on BBC 1Xtra in the same year speaks volumes.

The #Baddest has an infectious hook and a very musical beat which speak to the formula that has AKA’s music in high demand across the continent. Watch AKA’s the #Baddest featuring Burna Boy, Khuli Chana and Yanga here: https://www.youtube.com/watch?v=kmzRZ9NZs7E

AKA is officially the number #1 most played South African artist on all radio stations nationwide for 2015. AKA beats out the likes of Black Coffee, Micasa and KO locally, and internationally he beats the likes of Beyoncé, Ed Sheeran, Adele, Justin Bieber and The Weeknd by 2,880 plays; making AKA the King of South African radio airwaves.

The other most played acts that feature in the Top 4 are Chris Brown, Taylor Swift and Rihanna. This is the second year in the row that AKA is in the Top 5. This year the #3RDWRLDBOSS has had heavy rotations with tracks like “All Eyes On Me” and “Sim Dope” from his Gold Selling album LEVELS from 2014, and the new Summer Smash hits “Composure” and “Baddest“. AKA’s number #1 status is huge not only for any artist for the amount of great music that came out, but most importantly for an artist who didn’t drop an album in 2015.

“It’s been a Supa Mega year for AKA and the Vth Season. Who else will kill the game with just 2 singles?” commented Benza, Vth Season Managing Director and co-founder.