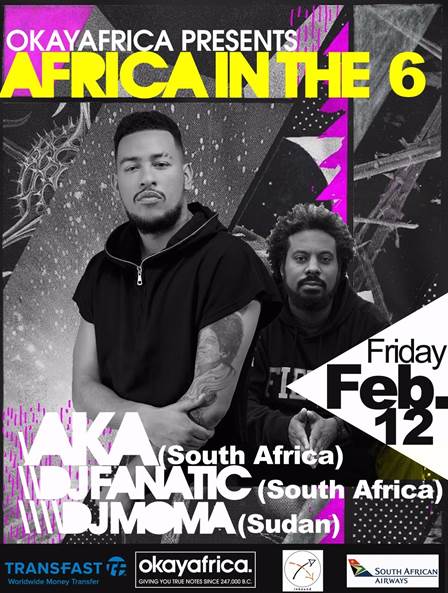 Johannesburg, Thursday, 11 February 2016 – AKA, the #3RDWRLDBOSS, has been invited to perform at the OkayAfrica exclusive invite only event, Africa In The 6, in Toronto, Canada, tomorrow, Friday, 12 February 2016, as well as to attend the 2016 NBA All Star Weekend.

OkayAfrica presents their first edition of Africa In The 6 as they head out to Toronto for the upcoming NBA All Star Weekend. The event features AKA and DJ Fanatic representing South Africa, and Everyday People’s DJ Moma representing Sudan.

AKA’s inclusion in this exclusive event as well as his invitation to attend the NBA All Star Weekend comes just after being tipped by BBC Radio 1Xtra as someone to watch in 2016. BBC Radio 1Xtra’s release of their “HOT FOR 2016” list last month saw AKA as the only African based artist to feature on the coveted annual tip list, which has previously featured the likes of Drake and Sam Smith.

2015 crowned AKA as the official KING OF SA RADIO and the momentum at which AKA has started 2016 has definitely set a precedent to what is surely going to be another ground breaking year for the #3RDWRLDBOSS.

Connect with AKA on social media to catch his journey in Toronto as he performs at the OkayAfrica Africa In The 6 event and attends a few NBA All Star games.