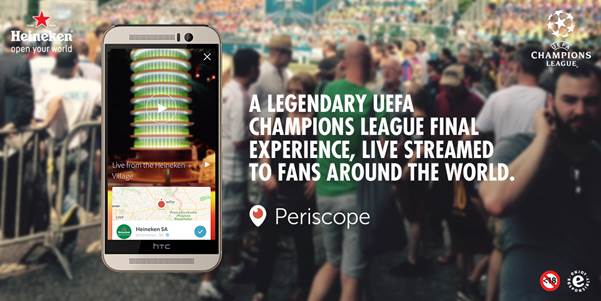 With one million people signed up for the iOS version of Periscope in the first ten days of the app’s launch, its recent purchase by Twitter, and consequent roll-out to Android, integrating Periscope into a brand marketing campaign seemed a no-brainer to innovative global beer brand, Heineken®.

As a result, Heineken® gave football fans the opportunity to immerse themselves in the UEFA Champions League (UCL) Final experience this past Saturday.

Wish you were at the #UCL Final in Berlin? Watch the action LIVE on #Periscope this Saturday #ChampionTheMatch pic.twitter.com/P9ecukv67K

Fans got to “experience” the UEFA Champions League final live in Berlin, through the eyes of South African, Justin Brebner. Justin, who SMS’d the underliner code from his Heineken® trophy bottle, won a trip to witness the clash between Juventus and Barcelona, courtesy of the beer brand. By equipping him with a smartphone enabled with the Periscope app, which allows people to broadcast live video streaming to the world, Heineken® helped give fans a unique perspective on the event – ensuring that they felt part of the Final and making their match night even more legendary.

Brebner‘s live broadcasts gave a glimpse into his UEFA Champions League experience – the stuff you can’t see on TV. The broadcast showed him enjoying the Berlin culture, hanging out in Heineken VIP zones before the game and much more.

“Heineken® aims to consistently be at the forefront of innovation and engage imaginatively with our consumers. We used Periscope to make the world of Heineken® all the more tangible” said Tjeerd Veldhuis, Marketing Manager, Heineken® South Africa.

Heineken® Open Your World
Heineken® Not for Sale to Persons under the Age of 18. Enjoy Responsibly.

Thanks for watching! #ChampionTheMatch with Heineken during the 2015/16 UEFA Champions League season. #UCL #UCLfinal pic.twitter.com/HTX9Vczp7S