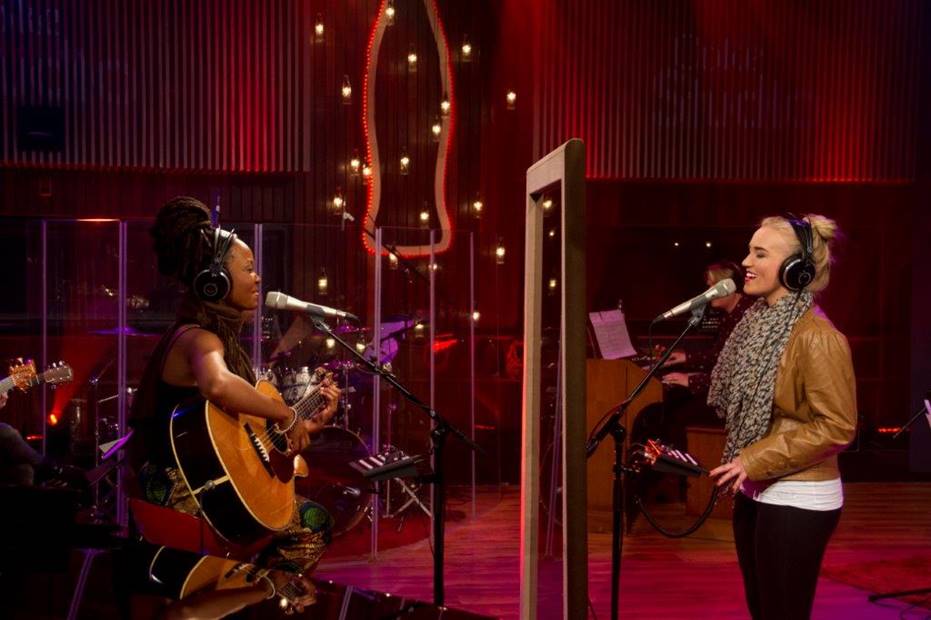 Four young and talented artists who are still relatively unknown to SA’s music scene have been given an exclusive opportunity to work together and create, what could be SA’s next hit music single.

The group of feisty females – comprised of singer-songwriters Salma Yusuf from Tanzania and local Lara Gear along with beat poet twins Tsholang and Boitsholo Bodibe (AKA Nina Femme and Sheela Na Gigh) – were teamed up to create a unique song on episode two of Coke Studio, which broadcasts on e.tv every Monday night.

Coke Studio is a music platform that gives both established and up-and-coming artists from different genres and backgrounds just three days to fuse their styles and come up with a unique song. The entire process is caught on camera giving audiences a “fly-on-the-wall” look into the music-making process. Viewers can watch the artists in action, witness all the behind-the-scenes drama and finally hear the artists perform their fusion track for the first time.

All four artists came out of Coke Studio RAW, an initiative that finds undiscovered talent and enables them to professionally produce a track that they can use to market themselves. A handful of the artists coming out of RAW were handpicked and given the opportunity to take part in Coke Studio.

For all four artists, this was the first time that any of them had been into a big recording studio and they embraced the opportunity.

“At first, I don’t think I realised how big of a deal it really was until I actually arrived at Coke Studio,” said Lara and Salma agreed saying she was ecstatic, “This was the moment that I had been waiting for – to show the world who I really am as a musician.”

When told that they would be working together and fusing their individual styles into one track, all four ladies were amped. “I was incredibly excited at the prospect of working with people who like myself, are ‘unestablished’,” said Nina. Sheela adds, “As a feminist, I was stoked to work with four talented, female artists. Not only that, but that one was a different nationality and another was a different race. I felt that these were the very things that would bring us together.”

The quartet quickly got to work on their song ‘It’s All Love’ which is about xenophobia. Each artist shared her personal experiences with xenophobia and poured this into the song. Lara says, “It is a relevant topic in our society, and no matter how much it may fade, there will always be glimpses of it here and there. So because of that, I truly hope that our song speaks to our nation and that our words are carried across the world. I hope that the song can unite people.” Nina adds, “Xenophobia has been a harsh reality for many. I resonated with the song from a personal perspective – I believe all our struggles are intersectional.”

The process of creating the song held some challenges for the individual team members. Lara shares, “The year had been quiet for me so it was hard to get back into a creative routine”. For Salma it was a lack of self-confidence, “I didn’t believe in my song writing and thought I was not that good at writing strong lyrics, but the people I worked with supported me and my ideas. I learnt that everything is possible it’s just a matter of believing in yourself and trusting your instincts!” Sheela struggled with trying to balance her work and Coke Studio commitments, “I’d go to work in the mornings and join the others later in the evening. When writing the song, it was hard to come on board when everyone else had fed off each other’s energies and to try fit in and find space on the song.”

Despite their difficulties, a song featuring all four voices was eventually formed. “I cannot wait for the public to hear what we have created! I really believe that this song has the potential to become an anthem among many people, as it relates to what so many individuals have been going through. It is going to smash the charts,” says Lara. Nina adds, “I’m looking forward to the public’s reception of the song and hope that our message comes through.”

For more Coke Studio stories like Salma, Nina, Lara and Sheela’s, tune into e.tv every Monday night at 8:30pm.