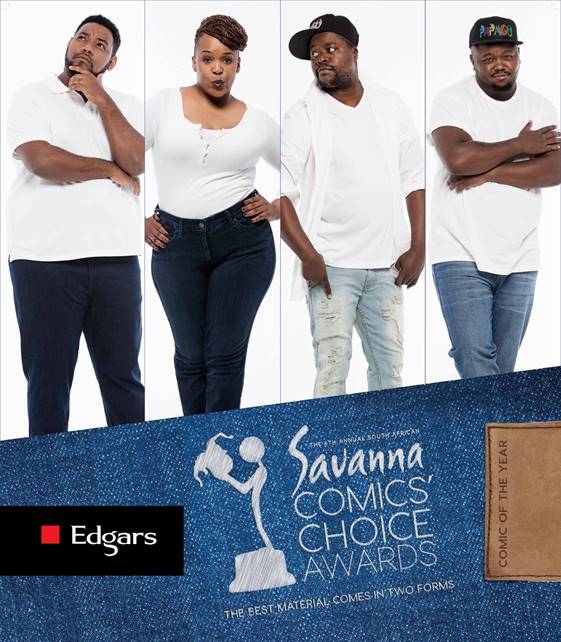 Comedians and demin have a lot in common when you think about it. They both are hard-working, versatile, customisable and authentic. Both come in different shapes and sizes and there are fits and styles to suit everyone.

So who better to sponsor this year’s Savanna Comics’ Choice Awards® Comic of the Year nominees than top clothing and denim retailer, Edgars?

The Comic of the Year nominees represent the best of the best in South African comedic talent, and as the retailer offering the biggest and best range of quality premium denim in South Africa, it’s only fitting (get it?) that Edgars chose to partner with Carvin Goldstone, Tumi Morake, Skhumba Hlophe and Mashabela Galane.

A proudly South African retail brand – and one that continues to support local talent – be it fashion or in this case comedy, Edgars is giving these local comedians a leg up, and indeed two legs in the best denims.

#EdgarsGoesComic by launching an exciting campaign to support its sponsorship and the nominees – both online and in store. Under the campaign theme of “The Best Material Comes in Two Forms”, fans of comedy and quality Edgars denim have the chance to win tickets to this year’s Savanna Comics’ Choice Awards on 3 September at the Teatro at Montecasino.

How can you win? Easy. Visit one of Edgars’ selected 15 stores in Gauteng, buy a pair of adult denims, snap a pic of your new denims and post it to Instagram using #EdgarsGoesComic and you could win tickets to the top comedy event of the year.

The competition is running in the following Edgars stores:

Join in the laughter online with #EdgarsGoesComic

The campaign kicked off with a hilarious photo shoot featuring four of the five nominees all dressed in their chosen style of Edgars denim. To see how the best material really does come in two forms and share in the fun, visit Edgars’ social media pages at:

In addition to its campaign, Edgars will give each Comic of the Year nominee an incredible weekend away with their partner or family to the value of R10, 000. Because to get to this point took a lot of hard work and they deserve a little treat.

About Edgars
Edgars is the Department Store of Choice for Men’s, Ladies, Kidswear, Footwear and Accessories for every occasion.
Showcasing the widest range of the latest fashion trends from top international brands to Edgars own private label brands; Edgars offers something for everyone. There are 181 Edgars stores in South Africa including neighbouring countries.