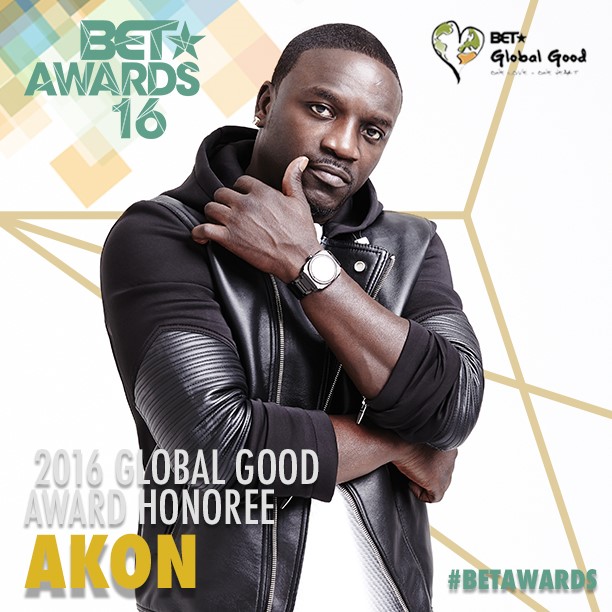 Johannesburg 20 June 2016: Today, BET (DStv channel 129) unveiled hip-hop superstar and global humanitarian Akon as the recipient of the 2016 Global Good Award at the “BET Awards”. The second annual Global Good Award is presented as a part of the “BET Awards” and honours individuals championing endeavours which positively impact change and heighten awareness in different parts of the world. A Grammy- and BET Award-nominated, two-time multi-platinum musical artist, producer, entrepreneur, and philanthropist, Akon holds a place in industry history as one of music’s most influential voices and is this year’s 2016 Global Good Award honouree.

Born in America to Senegalese parents, Akon developed a love for Senegal and deep desire to help the nation’s youth. In 2007, he launched the Konfidence Foundation, dedicated to providing Senegalese youth with educational resources and access to health services. In 2014, Akon co-founded “Akon Lighting Africa”, which currently brings solar-powered electricity to the homes of over 600 million people in more than 11 countries in rural Africa. He also helped launch the Solar Academy in Bamako, Mali, where engineers will be taught how to develop solar power, and has expanded his impact beyond Africa by teaming up with government officials in several Latin American countries, including Brazil, to bring electricity to needy homes.

The Global Good Award will be presented by Eva Marcille and Jidenna as a part of the “BET Awards.”

Hosted by Anthony Anderson and Tracee Ellis Ross, the “BET Awards” will include performances by Usher, Future, Bryson Tiller, Alicia Keys and Maxwell with special performances in honour of the late pop icon Prince by Sheila E., Janelle Monae, D’Angelo, The Roots and more. The star power continues as Gabrielle Union, Nate Parker, DJ Khaled and many others will take the stage as presenters during the 16th anniversary of the annual highly-anticipated televised event.

About the “BET Awards”
The “BET Awards” is one of the most watched award shows on US cable television according to the Nielsen Company. The “BET Awards” franchise remains as the #1 programme in cable TV history among African-Americans, and it is BET’s #1 telecast every year. It recognizes the triumphs and successes of artists, entertainers, and athletes in a variety of categories.