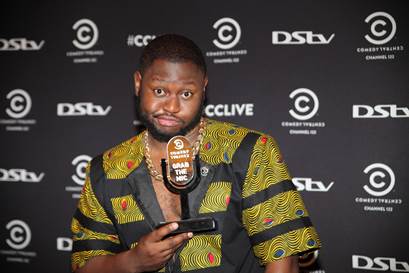 The amateur comedy talent search reached its pinnacle at the Parker’s Comedy and Jive, Montecasino when “Snooze” , 26, from Johannesburg defeated seven other contestants in a quick-fire battle of words, wit and nerves.

The competition allowed newcomers to the stand-up scene to flex their comedic muscles in front of an audience and a panel of judges consisting of local stand-up legends Jason Goliath and Deep Fried Man alongside Comedy Central boss Evert van der Veer and entrepreneur Joe Parker.

Mbeu “Snooze” Kambuwa had only 5 minutes to impress the judges at the Grand Final of the contest, beating the competition due to his unique style, strong presence and an amazing performance.

Snooze beat fellow contestants Nathaneal and the rest after a closely fought battle. All contestants had earned their places in the final after winning a spot during open mic auditions held at Parker’s between January and August 2015.

Comedy fans will be able to see highlights from the talent search and the Grand Final in a five-part TV series on Comedy Central (DStv channel 122) starting in January 2016.

For more information about Comedy Central Presents “Grab the Mic” Live at Parker’s, please go to www.comedycentralafrica.com, like us on Facebook or join us on Twitter @comedycentralAF. To join the conversation on social media, please use the hashtag #CCLive.