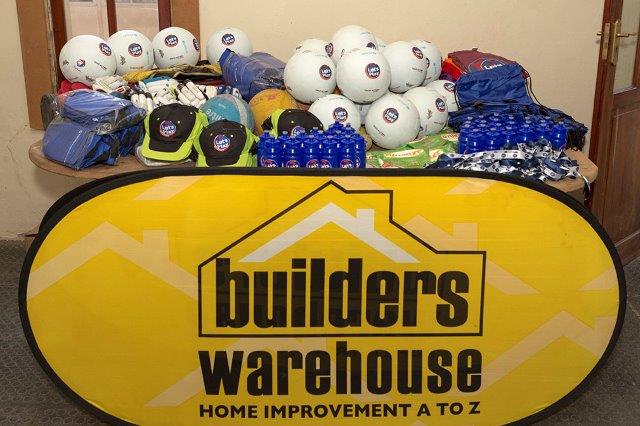 Let’s Play, along with associate partner, Builders Warehouse Bloemfontein, recently completed a donation of a variety of sports equipment to Lebone Village as part of their initiative – Play it Forward. More than 100 bins were placed in all Builders Warehouse stores countrywide to collect second-hand sports equipment, clothing and footwear. Let’s Play is a corporate social responsibility initiative developed by SuperSport in response to a national need.

“We all have unused sports equipment stashed in cupboards and garages; items that have been neglected or were replaced by newer versions. Why not rather donate the equipment to kids who can’t afford to buy new ones? This campaign has had astounding results, collecting approximately R500 000 worth of sporting equipment which has helped change the lives of thousands of our children,” says Let’s Play spokesperson, Vaughn Bishop.

Adrian Templeton, Branch Manager of Builders Warehouse Bloemfontein read a quote from Nelson Mandela, before handing out the sports equipment to the kids from Lebone Village. He read: “Sports has the power to change the world. It has the power to inspire, the power to unite people in a way that little else does. It speaks to youth in a language they understand. Sports can create hope, where there was once only despair. It is more powerful than governments in breaking down racial barriers.”

About Builders
Builders forms part of Massmart Holdings Limited under the registered business name of Massbuild Pty Ltd. There are four complementary brands namely Builders Warehouse, Builders Express, Builders Trade Depot and Builders Superstore. Collectively these brands offer the largest range of quality products and services for the small to large building and maintenance contractor, home improvement and DIY enthusiast as well as garden or any other DIY related projects. The stores have convenient trading hours and locations and offer the largest range of quality products and services under one roof at competitive prices. Builders Warehouse follows the big box or warehouse retail format and trades out of stores across South Africa, one store in Zambia, two stores in Botswana and three stores in Mozambique. Builders Express now trades out of 44 stores in four provinces catering to the home owner and DIY enthusiast. Builders Trade Depot operates 16 outlets catering mostly for medium to large sized contractors and tradesmen engaged in building, maintenance and renovation projects. Builders Superstore is a new store format that opened its first two stores in November 2013 in Tembisa and Evaton which is aimed at homes in townships, rural and developing urban areas as well as small contractors. The chain currently trades out of 8 stores.