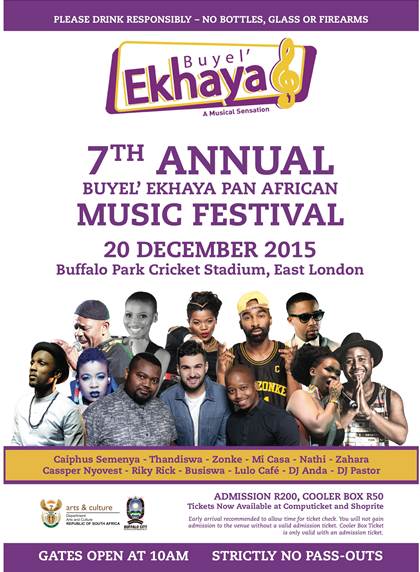 Tickets are selling fast for this year’s annual Buyel’Ekhaya Pan African Music Festival as people from the Eastern Cape and around the country get ready to celebrate African music, heritage and cultural diversity on Sunday 20 December 2015.

This year sees improvements to safety and security, which includes venue perimeter security, tighter access control and stricter security in and around the venue. Absolutely no one without a valid ticket will be allowed entry and no tickets will be on sale at the gate. People in possession of fraudulent tickets will be arrested. Only tickets bought at Computicket and Shoprite will be accepted.

About Buyel’Ekhaya Pan African Music Festival
Founded in 2009, the event has grown from 5,000 people in year one, to 40,000 in 2014. With a renewed vision to consolidate attendance figures and execute world-class security and production, 2015 will see East London’s cricket stadium return to its capacity of 22,000.