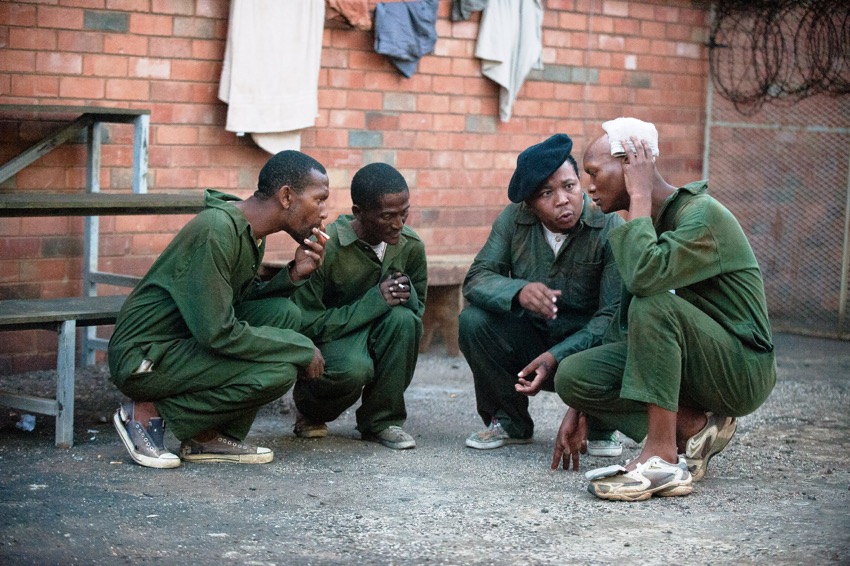 Award-winning director, Khalo Matabane (State of Violence, Conversations on a Sunday Afternoon and Nelson Mandela: The Myth and Me), acknowledged as one of South Africa’s leading talents has begun shooting his latest feature, 28’s, a gritty exposé of life inside prison. The film, inspired by Jonny Steinberg’s award-winning non-fiction novel, The Number, its big screen adaptation by Paul Ian Johnson reveals the origins of the fearsome numbers gangs that operate in prisons throughout South Africa.

Harking back to a sketchy 200-year-old tale, it’s said that the 27s and 28s originate from group of highwaymen. These robbers, under the guidance of an elder, escaped the misery of the mines and white oppression only to roam the Zululand hills plundering colonial outposts and relieving travellers of their goods. Fast forward two centuries and we encounter Magadien, hardened repeat-offender whose life is his loyalty to his brothers in the 28’s. But something stirs his rebellion, a life-threatening move as there’s no way out, of prison or from the sworn bloody oaths of his brotherhood. This is a hard-hitting tale of the reality of South African prisons and near-impossible redemption.

The production team is headed by award-winning producers Carolyn Carew and Tsholo Mashile (90 Plein Street and When We Were Black.) Carolyn Carew says that the process of making this film has been long time in the making with Khalo spending the last few years with the real Magadien Wentzel in Cape Town and afterwards with ex-prisoners in KZN to fully grasp the language and culture of the gangs.

Durban based Anant Singh’s Videovision Entertainment are co-producers, and will also distribute the film. Anant Singh commented, “I have been an admirer of Khalo’s work for a long time and we are delighted to have the opportunity to work with him. With his talent and creative vision for the project, he will certainly craft an amazing film.”

The production also marks the first co-production between South Africa and Reunion Island’s Tiktak Productions. The film also received funding support from the KZN Film Commission, the National Film and Video Foundation and the Department of Trade and Industry.

Born Free Media
BFM is an award winning South African film and television production-company specializing in fiction and non-fiction storytelling. They pride themselves on creating original and innovative content for the African continent and beyond. They have produced some of South Africa’s seminal documentaries and dramas.

BFM was formed in January 2005, with three shareholders, Khalo Matabane as Creative Director, Carolyn Carew as Executive Producer and Tsholo Mashile as the Financial Manager.

His documentary Nelson Mandela, the Myth and Me, a BC/Arte Germany co-production won the Jury Special Prize at the International Documentary Film Festival of Amsterdam (IDFA). His first dramatic feature film State of Violence was shown to critical acclaim at the Toronto and Berlin Film Festivals.

His television drama series When We Were Black, a coming-of-age story of a young boy on the eve of student uprisings in 1976, went on to win 7 awards including Best TV Drama Series and Best Director at 2007 SAFTAS; Best Drama at Fespaco and the Reims International Film Festival and had special screenings at INPUT 2007 in Switzerland and the Durban International Film Festival. It was broadcast on Canal+ and SABC 1.