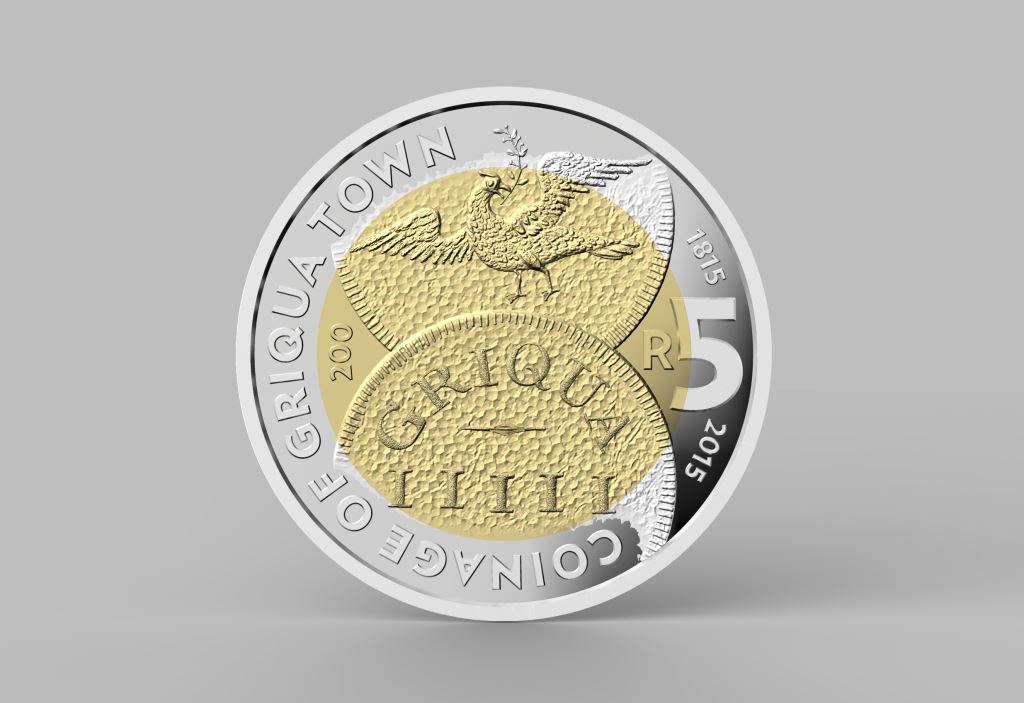 The numismatic coin range follows the announcement of the upcoming R5 commemorative currency coin which will be issued by the South African Reserve Bank (SARB) in 2016. The new Griqua Town R5 will be a regular legal tender coin, holding the same value and equal to the existing R5 coins that are currently in circulation throughout the country. The new R5 coin will therefore not hold any special or superior value to existing R5 coins.

For the coin collector, the numismatic coin range, available immediately from the South African Mint, comprises of a proof quality R5 coin, two R2 sterling silver, crown-sized coins, and a R2 ¼ oz 24 ct gold coin. The proof-quality R5 coin bears on the reverse, a rendition of the two sides of the original five ‘pence’ 1815 Griqua coin, slightly overlapped. The obverse of the new coin features the national coat of arms, the year ‘2015’, and the words.

The third product in this range is a R2 ¼ ounce 24 carat gold coin which bears on the reverse, the partial image of the obverse 1815 coin which bears the image of a dove with an olive branch in its beak, the words “1815 bicentennial 2015” and “Coinage of Griqua Town” along the perimeter of the coin. The obverse of the gold coin has the South African coat of arms, the words “2015 and “South Africa”.

Each coin combination is sold with a magnifying glass, symbolising and reinforcing the theme of going back into history, and looking deeper into the history of coinage in South Africa.

Introduced in 1815, the Griqua Town coin series consisted of a five and ten ‘pence’ made of silver as well as a half and quarter ‘pence’ made of copper. The common obverse of the four coins featured the emblem of the London Missionary Society, a flying dove with an olive branch in its beak. The reverse of each coin featured the words ‘Griqua Town’ and the denomination of the coin.

The 2015 Griqua Town numismatic range depicts these various elements from the original coin designs: a replica dove with olive brand in its beak, the words ‘Griqua Town’ and the numeral five portrayed as five single lines. The idea of taking a closer look at the history of our coinage and magnifying the intricate detail that numismatists seek out in coins, is symbolised by the magnifying glass that one receives with each coin purchase. According to Tumi Tsehlo, the Managing Director of the South African Mint, “we are proud to bring to life the country’s coinage history with this range that is essentially tells the story of other coins. The 2015 Griqua Town coins are “coins about coins””.

About the South African Mint
The South African Mint is one of the world’s leading mints and has, over the years, earned a worldwide reputation for its appealing designs, exceptional craftsmanship and the high standard of its quality coins, winning numerous international awards in the process.

The South African Mint is a wholly owned subsidiary of the South African Reserve Bank (SARB), established in accordance with the SARB Act, which authorises the SARB to ‘coin coins or cause coins to be coined’.

The South African Mint is made up of two divisions: Circulation Coins and Numismatics (or collectable coins). The Circulation Coins Division manufactures the legal tender coins that we use in our everyday transactions, as well as coin blanks that are sold to customers for minting. It also produces circulation coins for the export market, minting the coins that are used as currency in numerous countries in Africa, Asia, Europe and South America.