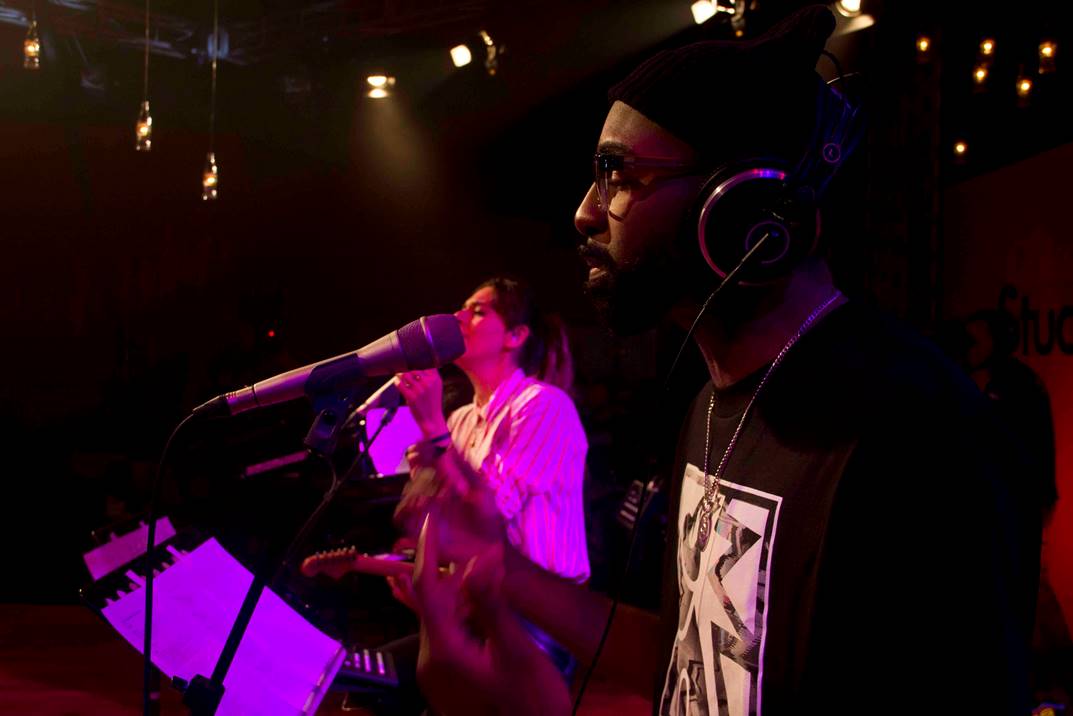 September 2015 – What do you get when you mix rap and pop? Ask emcee Riky Rick and Shotgun Fakes (comprised of former members from The Arrows) and the answer will be ‘Pick Me Up’ – a song with a truly special sound. The artists recently teamed up to craft the song at Coke Studio which broadcasts on e.tv every Monday night at 8:30 PM.

Coke Studio is musical platform that gives both established and up-and-coming artists from different genres and backgrounds just three days to fuse their styles and come up with a unique and exciting song. The entire procedure is caught on camera giving audiences a “fly-on-the-wall” look into the music-making process. They can watch the artists in action, witness all the behind-the-scenes drama and finally hear the artists perform their fusion track for the first time.

According to Shotgun Fakes’ songstress, Pam Myburgh, “We were really excited to be part of Coke Studio as there is nothing quite like it in South Africa.” She, together with her husband Stefan, were amped to hear that they had been teamed up with Riky Rick as they had been looking for an opportunity to work with the SAMA Award nominee. Riky Rick was equally enthusiastic about their fusion, saying, “I’ve always been a fan of their music. I’ve even sampled them for my album so it was exciting.” This is one of the first projects in which the newly formed Shotgun Fakes have been involved.

With only three days in which to come up with a fully formed song, the artists immediately got to work, getting to know each other musically. They also listened to a wide range of references and fiddled around on piano and guitar to find the song’s feel. Adding to the pressure was the fact that Riky Rick was man down with flu on the second day. “Normally when we come up with songs it’s like cooking all the elements in different pots, letting them cool off and coming back to taste them after a while. At Coke Studio we couldn’t do this and had to be very committed to what we came up with,” explains Pam. It was also an entirely different experience writing a song while the cameras were rolling and Riky Rick, an accomplished actor, quickly taught Pam and Stefan how to work as if no one was watching and they were soon lost in a world of music and lyrics.

The fusion resulted in a song called ‘Pick Me Up’, which Riky Rick says is about feeling down and having someone to depend on. Pam shares that the song is the perfect combination of the artists’ styles. “We based the song around the guitar Stefan was playing. It’s really upbeat and I added the drum beat to give it a hip hop/pop feel. We wanted it to be a cross genre beat,” explains Riky Rick.

Both Riky Rick and Shotgun Fakes loved filming the reveal in which the house band played the song with the energy and enthusiasm that the artists had in mind. Pam says, “We felt like we were architects who had left blueprints with a builder and had come back to see an incredible building.”

The artists are super excited to see South Africa’s reaction to the song. “It’s always thrilling to release new music. I pray everybody is down with the song,” shares Riky Rick.

Tune into e.tv on Monday night at 8:30pm to catch the Riky Rick/Shotgun Fakes’ fusion story on Coke Studio.

About The Coca-Cola Company
The Coca-Cola Company (NYSE: KO) is the world’s largest beverage company, refreshing consumers with more than 500 sparkling and still brands. Led by Coca-Cola, one of the world’s most valuable and recognizable brands, our Company’s portfolio features 20 billion-dollar brands including Diet Coke, Fanta, Sprite, Coca-Cola Zero, vitaminwater, Powerade, Minute Maid, Simply, Georgia and Del Valle. Globally, we are the No. 1 provider of sparkling beverages, ready-to-drink coffees, and juices and juice drinks. Through the world’s largest beverage distribution system, consumers in more than 200 countries enjoy our beverages at a rate of 1.9 billion servings a day. With an enduring commitment to building sustainable communities, our Company is focused on initiatives that reduce our environmental footprint, support active, healthy living, create a safe, inclusive work environment for our associates, and enhance the economic development of the communities where we operate. Together with our bottling partners, we rank among the world’s top 10 private employers with more than 700,000 system associates. For more information, visit Coca-Cola Journey at www.coca-colacompany.com, follow us on Twitter at twitter.com/CocaColaCo, visit our blog, Coca‑Cola Unbottled, at www.coca-colablog.com or find us on LinkedIn at www.linkedin.com/company/the-coca-cola-company.

1 thought on “Coke Studio: Episode 5 – Riky Rick and Shotgun Fakes’ Song Synthesis is a ‘Pick Me Up’”