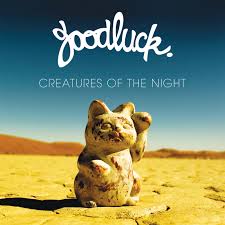 Yule Darq’s review:
I have to say, get this album and watch the DVD before listening to the album. You will be doing yourself a huge favour, as this DVD takes you on Goodluck’s journey. You see writers block, laughs, frustrations, teamwork, disappointment, and awkward moments, celebrations and so much more. It’s a natural journey, nothing is rehearsed or seems fake.

Whilst watching This Might Sound Crazy, there were points where I was saying things like – “no, I just want to hear this song now” (behaving like a child before Christmas) but I couldn’t find myself pausing because I felt a connection with Goodluck, not just the band but the entire crew that was involved in the creation process. I even watched the credits till the end.

After watching the DVD, I listened to album and wow, the sound that came from them is amazing. You definitely need good sound equipment to listen to this album and truly appreciate it, by doing so, you can hear the each and every element that was recorded and how it was used in each song, like the ocean crash against the rocks and so forth.

The bass released on some of their songs is just so amazing, I also enjoyed how they use different vocalists, that for me was a huge plus.

In my opinion, Goodluck should change their name to GreatJob because that’s what they’ve been doing since day 1.

Favourite Moments:
Walking Through Dessert Back And Forth
Capturing The Water Sound
Recording In The House
The Dirty Mini Coopers
Recording At The Edge Of A Cliff

Shout Out:
Thanks Trace Urban for blessing me with this really great work.