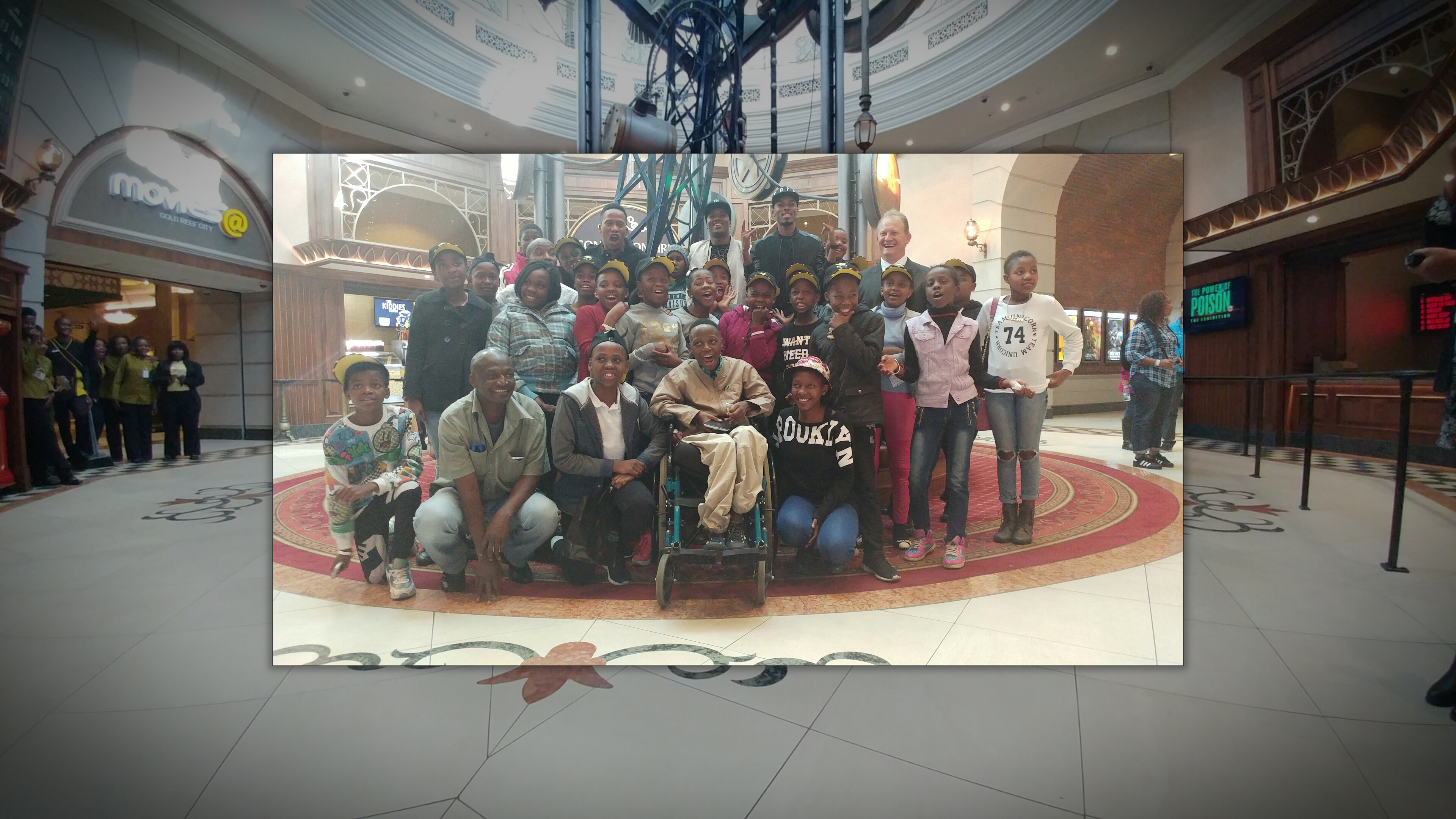 On Saturday, 28 May 2016 Simphiwe Linda celebrated his his coming of age, 13th birthday in spectacular fashion with his idols Dreamteam and Mduduzi Mabaso, classmates and family members at a surprise party hosted by Gold Reef City. One of Simphiwe’s biggest dreams was to meet his role models, who were honoured to spend the day celebrating this brave young man’s birthday with him.

Simphiwe and 25 of his classmates enjoyed a movie, Ten-Pin bowling and Arcade games at the Magic Company, followed by lunch at the Golden Falcon Spur. Simphiwe was delighted to receive a special birthday cake featuring Spiderman, which Gold Reef City’s Chef, Preshanthan, prepared especially for him. The highlight of the day was a special treat from Capital Air – a Jozi and Soweto heli flip!

On the surface, Simphiwe is a typical teenage boy who dreams of being just like his superhero, Spiderman, loves soccer, with his favourite team being Mamelodi Sundowns, enjoys gaming and his current favourite song is ‘Rainbow’ by Black Motion. Simphiwe was caught in the crossfire of a shootout near his home in Rosettenville and was hit by a stray bullet, in November 2015, which resulted in Simphiwe losing the use of both his legs.

A month later, 947 ‘Breakfast Xpress’ presenter Darren Simpson responded to a Christmas Wish which was sent to the popular radio station on behalf of Simphiwe by one of his classmates.

Through the Christmas Wish initiative, 947 and Gold Reef City came to the assistance of both Simphiwe and his family. Simphiwe received R5000 in Pick n Pay vouchers to help celebrate the festive season and R3000 every month for a year to support the family with living expenses. Following the shooting, the family was evicted. To help the family back on their feet, Gold Reef City assisted in find a new home and have even installed ramps and bars to help mobilise Simphiwe around the house and employed his father George as a Security Officer.

Simphiwe was also delighted to receive a Sony PSP and the ‘Key to the City’, which entitles him and his family to a meal, movies, Ten-Pin bowling and Gold Reef City Theme Park facilities once a month for 12 months following his recovery.

When asked how he enjoyed his birthday, Simphiwe said, “My 13th birthday was one of the most amazing days of my life and I had the best time with all my friends and family. My favourite part of the day was when I met Dreamteam and Mduduzi Mabaso, I can’t say thank you enough.”

That was me before, after attending this, I’ve had a new look on them. Simphiwe Linda’s story was touching and made me appreciate life more but it more over, it was watching his reactions when he met his role models. They spoke to him and advised him on life also asked him questions. The engagement he had with them, that made it really special.

I wish there were more initiatives like this. Not just delivering goods but actual human interaction.