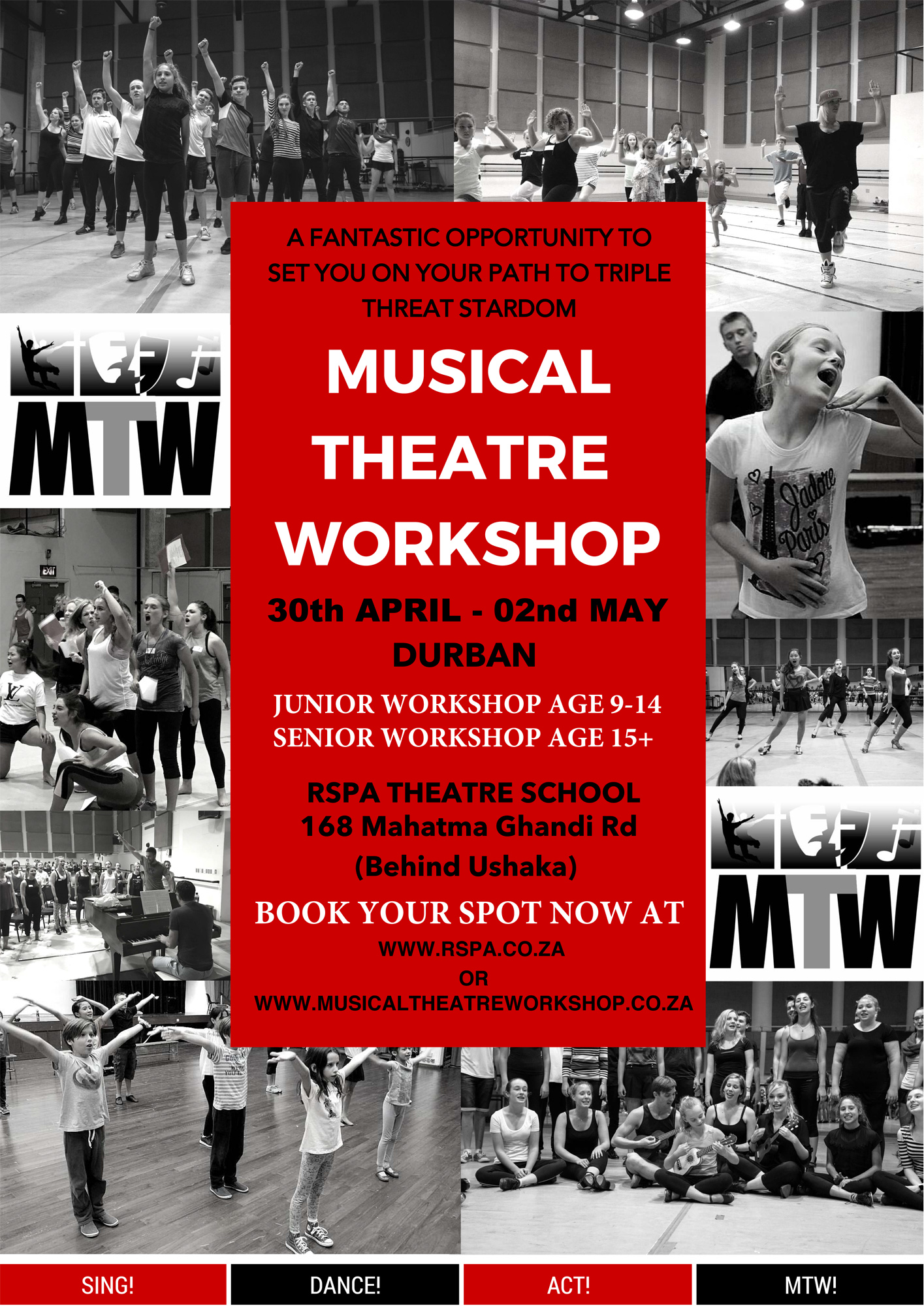 The two Musical Theatre Workshops hosted by award-winning triple threat performers, Duane Alexander and Anton Luitingh in association with the Rising Star Performing Arts Theatre School (RSPA) that were scheduled to take place in Mtunzini and at Crawford College have been consolidated into one workshop now taking place at the RSPA Theatre School, located behind Ushaka at 168 Mahatma Ghandi Road from Saturday, 30th April to Monday, 2 May 2016. “Taking parents requests into consideration we opted to rather host one workshop in a more central location and over the long weekend at the end of April,” says Duane Alexander.

The Musical Theatre Workshop is run in two groups; Juniors from eight to fourteen years and Seniors from the age of fifteen years to adults. This is a wonderful opportunity for young singers, actors, dancers and drama students to learn the art of being a triple-threat performer in musical theatre and to fine tune their singing, dancing and acting skills from two of South Africa’s highly regarded and experienced musical theatre performers. Director, musician, actor, singer and songwriter Anton Luitingh and choreographer, dancer, dance teacher, actor and singer Duane Alexander. These two award-winning triple threat performers have performed locally and internationally in major music productions including Rocky Horror Picture Show, Evita, Cats, Beauty & the Beast, Grease, Chicago, Jesus Christ Superstar, Cabaret, The Sound of Music and most recently Singin’ in the Rain.

The Musical Theatre Workshop was established in 2010 to offer those interested in embarking on a career in musical theatre practical training where students learn in a safe, theatre environment that is stimulating, educational and entertaining. The three-day course comprises of professional vocal coaching, dance training and acting classes as well as repertoire, audition preparation and improvisation. Fees are R1200 per person. Participants receive a certificate and at the end of the workshops and parents are welcome to watch a special 30 minute presentation by the young stars in the making. Book now to avoid disappointment! To register, visit www.rspa.co.za or www.musicaltheatreworkshop.co.za. For information, email info@rspa.co.za or info@musicaltheatreworkshop.co.za or call Anton on 082 336 7913.

Participants will learn invaluable techniques to assist them to achieve their dreams of one day being on stage as a professional performer.

Biographies
Born and educated in Pietermaritzburg, Duane Alexander has been dancing and performing since the age of 6. He studied at the Waterfront Theatre School in Cape Town where he twice received the award for ‘Most Outstanding Student’. He also obtained his Performer’s Certificate in Musical Theatre, and teaching degrees in both Modern and Tap dance. After graduating, Duane performed in and was Dance Captain on the original SA cast and international touring companies of Cats, Joseph and the Amazing Technicolour Dreamcoat, Throughly Modern Millie, Jesus Christ Superstar, Chicago, Beauty and the Beast, Grease, Cabaret, Jersey Boys, The Sound of Music and recently Singin’ in the Rain.

Anton Luitingh has been involved in many facets of the entertainment industry, working as an actor, singer, songwriter, musical director, musician and voice artist. He obtained his B.Drama (Hons) Cum Laude degree in Drama at the University of Stellenbosch and has since performed on local and international stages in various genres Lead roles include performances in The Rocky Horror Picture Show, Cats, Jesus Christ Superstar, Showboat, Beauty and the Beast, Porgy and Bess, Noah of Cape Town, Evita and Sunset Boulevard. As resident director, Anton has worked with local and international creative teams behind Rent, Chicago, Phantom of the Opera, Jersey Boys, The Sound of Music and recently, Singin’ in the Rain.