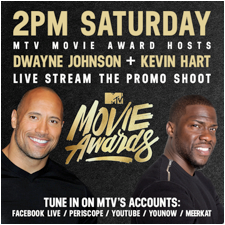 This year’s show will tape at Warner Bros. Studios in Burbank, California on Saturday 9 April and broadcast on MTV across Africa on MTV on Monday 11 April at 21:30 CAT (Red Carpet Show) and 22:00 CAT (MTV Movie Awards). For the first time ever, MTV will take the telecast entirely outdoors and onto the backlot to capture the essence of movie making magic against a dramatic nighttime backdrop.

Performers and presenters will be announced at a later date.
“It’s an honour to be hosting the MTV Movie Awards with a guy who’s not only one of the funniest guys on the planet, but who’s often mistaken as my twin: Kevin Hart,” said Dwayne Johnson. “We live for our fans and promise to make this an epic, historic unforgettable night for them.”

“I love hosting – it’s my thing,” said Kevin Hart. “Dwayne and I are the perfect team for the epic 25th anniversary show. It’s going to go down.”
“Dwayne Johnson and Kevin Hart define what it means to be modern movie stars,” said MTV Movie Awards Executive Producer Casey Patterson. “They have a direct and personal relationship with their fans, who love them for it and have made them two of the biggest entertainers in the world. They are bringing the action and comedy to the big 25th anniversary of the MTV Movie Awards, which makes me excited and frankly a little afraid. Double trouble!”

In a fan-forward first, MTV is giving the audience the once-in-a-lifetime chance to write and direct the official “2016 MTV Movie Awards” promo campaign with Dwayne and Kevin via multiple simultaneous livestreams. Tomorrow, beginning at 21:00 CAT, the event will broadcast across Facebook Live, YouTube, Periscope, Meerkat and YouNow, allowing fans the opportunity to give the hosts direction via comments and tweets using #movieawards. Once complete, MTV will utilize the footage for promos airing across linear, digital and social platforms, crediting the fans that had a hand in creating the content.

About Dwayne Johnson
With film revenues exceeding $5.7 billion worldwide, Dwayne Johnson has solidified himself as a global box-office powerhouse in both film and television and for the second time in three years (2013, 2015) has become the #1 international box-office star in the world.

Always adding to his busy schedule, Johnson shows no sign of slowing down as he recently starred in the summer blockbuster San Andreas, and currently stars in the critically acclaimed “Ballers” for HBO, directed by Peter Berg, where he plays an ex-football star turned money manager, navigating life on the other side of the field, which will be going into its second season this year. Also adding to a slew of tent-pole films in 2016, Johnson recently completed filming Central Intelligence opposite Kevin Hart, and will film the big screen adaptation of Baywatch, Furious 8, and an action based feature Rampage. He is also tied to the remake of the cult classic, Big Trouble in Little China for FOX and The Jansen Directive for Universal. Also upcoming in 2016, Johnson will lend his voice to the new Disney Animated film Moana.

In addition, Johnson’s production company, Seven Bucks Productions, will be releasing a youth prison documentary, “A Rock and a Hard Place,” for HBO in 2016. Recently announced, Johnson is also developing an LAPD based television project “Boost Unit” for FOX.

About Kevin Hart
Kevin Hart has continued to work non-stop and in 2015 Kevin can be seen in two movies and on the road for his What Now Comedy tour. His recent movie projects include the much anticipated Ride Along 2, the sequel to last year’s one-hundred-million-dollar blockbuster hit of the same name, Screen Gems’ The Wedding Ringer, opposite Josh Gad and Warner Bros.’ Get Hard, opposite Will Ferrell. The consummate worker, Hart is also a force in television, Executive Producing the show, Real Husbands of Hollywood which premiered its third season last September.

This year, Hart will also appear in the highly anticipated action comedy Central Intelligence, opposite Dwayne Johnson, as well as the animated film The Secret Life of Pets (Illumination Entertainment). Rounding out the year, Universal Pictures will release the What Now concert film. Kevin will also be embarking on a multi-city international live tour, What Now, following his highly successful domestic tour of the same name.