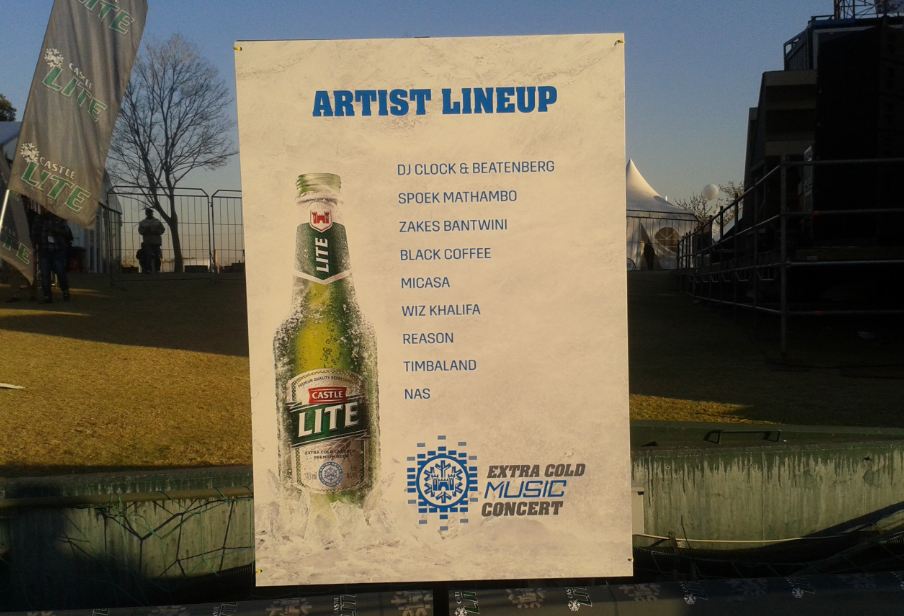 Let me dive straight in.

Trying to get in wasn’t the simplest thing, so you kind of get disheartened by the unauthorized car guards flooding the streets and running besides your car.

Then you enter and yeah, you just know you are going to have a great time. You are greeted by a bar soon as you enter, which isn’t a problem because the drinks weren’t over priced.

The event was cool, besides it being 2 degrees and also witnessing frozen grass at 1 point, I had a great time. Some really cool moments had been Ladysmith Black Mambazo being on stage with Mi Casa and then watching them perform their own songs, this was unexpected. Timbaland and his DJ mentioning the late Nelson Mandela was a beautiful moment but the greatest moment was when Green Lantern, Nas‘s DJ played 1 of Brenda Fassie‘s songs, the crowd was in awe. A cool feature was the free WiFi provided to allow us to download ‘My Sugar’ by Mi Casa and Ladysmith Black Mambazo, at no cost to us. There was also this really cool Caste Lite truck that provided free Castle Lites to people that either danced; twerked or kept their thoughts cold. Timbaland‘s stage was pretty cool, also how he came out to perform was proper. A big shout out goes to the orchestra that Nas performed with, great work by them.

On the flip side, why was Timbaland lip singing? It also felt like he was presenting his songs and should have been a DJ rather than an artist on stage. It was great that he played his own productions but then there were moments where he was on stage watching us. Black Coffee cutting his song short and walking off stage like a superstar was a big disappointment from him, even if his set was finished. Reason is great and I’m a fan of his, that’s why I have to be hard on him. His performance slowed down the tempo and it was cold, we needed to be moved. Another concern was he features too many people or he is featured on too many songs, that meant he performed half a song, a lot of times.

A couple of hiccups took place and there was a major concern. The sound crashed on a few occasions and another sound concern was the echo that was bouncing from the 1 end to the other. The artist transitions irritated as we waited for the next act as the stage had to prepared and we got really boring music. I personally couldn’t complain about the toilets, there wasn’t enough but this wasn’t a problem. The biggest concern was security, despite it being visible, a lot of people were pick pocketed and I only spotted 1 police officer on duty, another was in civilian clothing. Something to look into.

It was proper though, I enjoyed myself. There was this beautiful view you got when you stood far back on the highest point and saw everyone, that was insane. Really cool turnout.