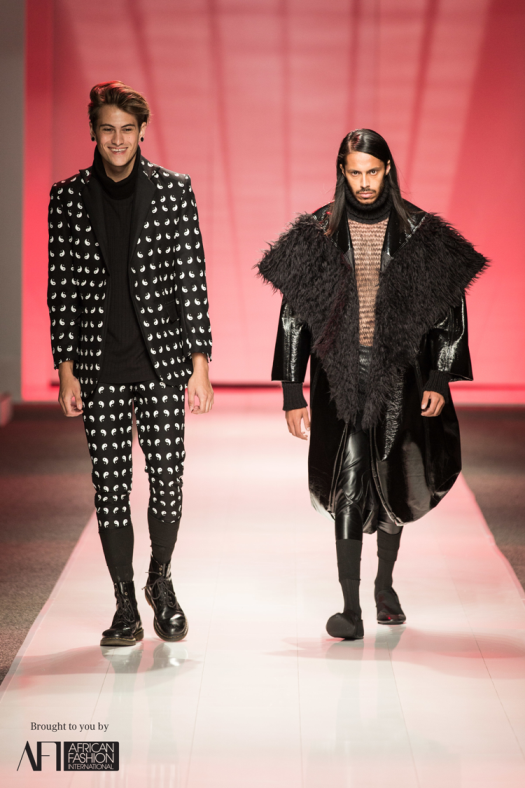 After presenting standout collections at Mercedes-Benz Fashion Week Joburg 2015, four out of the 12 AFI Fastrack™ contestants have been singled out as the finalists for 2015, and will embark on a year of learning and tutelage to establish themselves as professional, successful brands.

This year’s AFI Fastrack™ finalists are Nthabiseng Molefe from Durban, Thebe Magugu and Armand Dicker from Cape Town and Martelle Ludik from Johannesburg.

All four of the finalists were awarded with a R10 000 cash prize, as well as an opportunity to launch a capsule collection at Mercedes-Benz Fashion Week Africa 2015, whereafter the winner will be named AFI Young Designer of the Year.

In preparation for the showing of their capsule collections, the finalists will each have a three month internship with an established AFI fashion designer suited to their individual skills, style inspirations and future brand goals. This is meant to inspire, teach and guide young designers into the South African and International fashion industry.

“The goal of AFI Fastrack™ is to give young, talented designers the platform on which to build their success and develop into respected, established designers – which further helps to grow the industry. This year we had incredible talents showcasing their work, which made the selection of the top four very difficult, but also highly rewarding. AFI is proud to nurture and support these young designers” says Sizwe Nzimande, Group Marketing Manager for African Fashion International (AFI).

Nthabiseng’s collection, titled “Dimensions” and inspired by Cubism, is characterised by multiple lengths and angles, with contrasting textures and colours adding to the intriguing depths and creativity of the collection. Thebe Magugu, similarly, drew inspiration from the idea of “multiple dualities”, exploring concepts of “masculine femininity” and “serious playfulness” in a collection that is intelligent and engaged with the history of design.

In their respective collections, both Armand Dicker and Martelle Ludik expressed themes of androgyny, blurring the lines between traditionally male and female attire. Armand Dicker drew inspiration from Dante’s Inferno, identifying the overall mood for his collection as “ominous,” in warm red and orange hues. Conversely, Martelle Ludik’s collection revolved around the idea of identity and boundaries, questioning preconceived stereotypes and ideals of perfection.

All of these young designers were scored on their Creativity and Commercial Thinking, as well as Technical Skill and Presentation, with the winning four having demonstrated excellence in all four categories.

Many former AFI Fastrack finalists – such as 2013 winner, Eleni Labrou of AKEDO, 2013 finalist, Jenevieve Lyons and 2012 finalist, Khothatso Tsotetsi of KL Tsotetsi – have established their own successful labels and have made significant inroads in the local design world after being given the AFI Fastrack platform, while 2014 AFI Young Designer of the Year, Rich Mnisi, owner and designer for label OATH, joined the judges’ panel for this year’s AFI Fastrack™ programme.