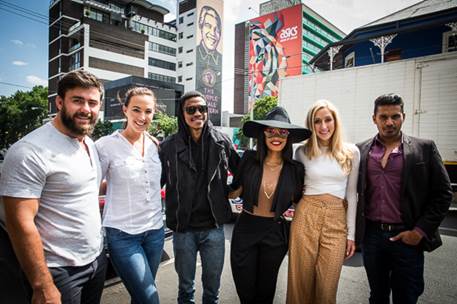 The barrier draw to unveil the horses’ numbers and starting positions for the highly anticipated Gauteng SANSUI Summer Cup took place at the Smoke House and Grill in Braamfontein, Johannesburg this week.

The final pieces of the puzzle are falling into place before Gauteng’s most anticipated horse racing event comes to Turffontein Racecourse on Saturday 28 November. The final field of 12 runners having now been confirmed, it is an exciting draw given the lucrative prize money of R2-million. The quality of the final field makes this race ultra-competitive and one of the most anticipated runs this season. The main race will be over 2000m and takes place at 16H15

Generally, the barrier draw is computer generated but for premier races such as the Gauteng SANSUI Summer Cup, the draw is conducted manually in front of patrons, media, stakeholders and celebrities. It is officiated by some of South Africa’s horse racing elite.

The results of yesterday’s barrier draw are as follows:

French Navy, one of two runners for champion trainer Sean Tarry, might just be a favourite after his impressive performance at the Peermont Emperor’s Charity Mile last weekend.

Phumelela Gaming Sales and Marketing Executive, Clyde Basil says: “We are pleased to unveil the 12 most deserving horses competing in this year’s edition of the Gauteng SANSUI Summer Cup. We have no doubt that our horse racing family, fans and punters alike will be delighted to find out that we have new top thoroughbreds and jockeys who are in it for the win,” said Basil.

To add excitement to the day’s proceedings, guests were treated to a sight-seeing tour of the City of Johannesburg took place earlier on the day. The tour resonated with this year’s theme of “More Jozi“, which seeks to celebrate and recognise the glitz and glamour of the city. Some of the ‘who’s who’ of Mzansi showbiz and this year’s It’s A Rush Celebrity Charity Dash participants like Tamerin Jardine, Robbie Coetzee, Solo and Stevie French joined Gauteng SANSUI Summer Cup ambassador, Dineo Moeketsi and stakeholders from Phumelela Gaming, JD Group and Megapro Holdings at the draw.

“The excitement is really building as race day approaches and this year we expect to draw new and bigger crowds to this prestigious event. There will be plenty of offerings from fashion, food, music and much more,” comments Taryn Rautenbach, Megapro Event Organiser of the Gauteng SANSUI Summer Cup.

“The Gauteng SANSUI Summer Cup is a powerful charity initiative that supports and gives back to the community. I’m very proud to be associated with this prestigious event for the second time in a row and this time I will be the racing Queen,” says socialite Tamerin Jardine.

Held on 900 acres of picturesque track overlooking the city, the Gauteng SANSUI Summer Cup draws more than 5 000 attendees each year. Other activities in the line-up at this year’s day-night event includes the Summer Garden, a fashion show, a competition for the best dressed, a celebrity sprint in aid of charity, a mo-kini men’s race, which supports prostate cancer research and sizzling musical performances by artists including Cassper Nyovest, MiCasa, Muzart, Gold Fish, Goodluck and Vin Deysel.

There’s no telling who will be first out of the gate, first to finish or even who will be first in the fashion stakes. So come 28 November, 2015, make sure you are the Turffontein Racecourse in person to find out.

About ‘MORE JOZI’
The theme for this year “MORE JOZI” sews a celebration of the city through sports, art, history and fashion. There’s so much more happening in Jozi that any other city in Africa. The theme resonates with the quality of the city’s old horse racing tradition. Renowned for her beauty and glamour, Jozi has become synonymous with fashion, history, art and an all-round entertainment.

Transport your wardrobe from then to now with a mix of the old and new and a touch of Pink!

General Information
The Gauteng SANSUI Summer Cup general access ticket is R75 and this will give you access to Turffontein Racecourse, as well as the official Sound Experience after party (No U18’s allowed). A host of hospitality options are also available: A R275 Jozi Circle option is the golden ticket to Gauteng’s not to be missed summer event of the year.

For those who really want an all-out VIP experience, R1 995 per person for the Summer Sound Experience package will get you racecourse admission, fully staffed hospitality in a luxury Bedouin facility with a view of the Sound Experience entertainment and horse racing rush, delicious meals, complimentary local bar, car park access, betting facilities and access to the all-important Sound Experience after party and private bar area.

Nothing is big unless it’s Jozi big! Tickets are limited so get to Computicket today!