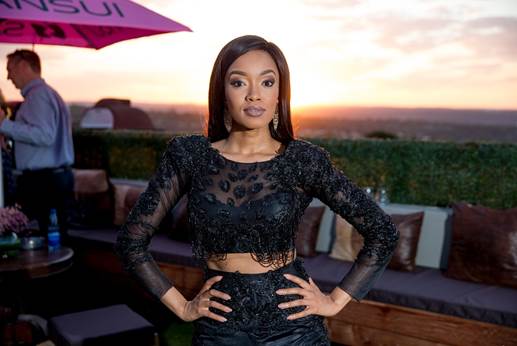 Johannesburg’s premier horse racing event welcomed familiar and new faces to the launch of the 2015 Gauteng SANSUI Summer Cup at the Copper Bar in Bryanston on Tuesday evening. The uber exclusive event marked the official countdown to this year’s More Jozi horse race, which takes place at Turffotein Racecourse on 28 November 2015.

The launch kicked off with the acoustic sounds of Warren Gravies, while guests mingled and sipped on their cocktails and enjoyed the backdrop of the beautiful sunset views of Johannesburg. Dressed in her Queteria and George design, Gauteng SANSUI Summer Cup ambassador Dineo Moeketsi welcomed guests to the event. The actress and TV presenter not only introduced this year’s impressive musical line-up, but also unveiled some of the other exciting activities expected at the races, including the hugely popular 13th race – the Mokini race. Another fan-favourite at the Gauteng SANSUI Summer Cup is the It’s A Rush Celebrity Dash, which attracts some of the country’s most loved celebs. The names of this year’s dashers were revealed at the launch, which includes radio and TV presenter Jennifer Su, actress Jay Anstey and Lions rugby star Courtnall Skosan among others. It’s a Rush Celebrity Charity Dash, now in its fifth year will see the winning celebrity handing over R844 151.25 to the official charity recipient, SOS Children’s Villages.

The Gauteng SANSUI Summer Cup is Johannesburg’s premier horseracing event, packed with something for everyone, including a fashion show for up and coming designers, Summer Garden and Summer Sound Experience hospitality packages, and the golden ticket to the Jozi Circle after-party. This over and above the main event that features top thoroughbreds battling it out for the staggering stake of R2 million.

Hosting partners Phumelela Gaming are also thrilled to be staging this prestigious event. Clyde Basel, Phumelela Sales and Marketing Executive said “We are so proud of the relationship that we have built with the Gauteng SANSUI Summer Cup and feel very privileged to be associated with such a prestigious event”.

The Gauteng SANSUI Summer Cup will be hosted on Saturday, 28th of November at Turffontein Racecourse.

About More Jozi
The theme for this year “MORE JOZI” sews a celebration of the city through sports, art, history and fashion. There’s so much more happening in Jozi that any other city in Africa. The theme resonates with the quality of the cities old horse race tradition. Renowned for her beauty and glamour, Jozi has become synonymous with fashion, history, art and an all-round entertainment.


Transport your wardrobe from then to now with a mix of the old and new and a touch of Pink!

General Information
The Gauteng SANSUI Summer Cup general access ticket is R75 and this will give you access to Turffontein Racecourse, as well as the official Sound Experience after party (No U18’s allowed). A host of hospitality options are also available: A R275 Jozi Circle option is the golden ticket to Gauteng’s not to be missed summer event of the year.

For those who really want an all-out VIP experience, R1 995 per person for the Summer Sound Experience package will get you racecourse admission, fully staffed hospitality in a luxury Bedouin facility with a view of the Sound Experience entertainment and horse racing rush, delicious meals, complimentary local bar, car park access, betting facilities and access to the all-important Sound Experience after party and private bar area.

Nothing is big unless it’s Jozi big! Tickets are limited so get to Computicket today!

Joburg’s biggest horse racing event serves as a vehicle to increase tourism to Gauteng by appealing to an international audience and expanding on the calibre of the Gauteng SANSUI Summer Cup by enhancing the experience of local and national visitors on race day.

To enjoy the best that racing has to offer fans can purchase tickets ranging from general access (R75) to a variety of premium hospitality options (maximum R2 845). The popular ‘Summer Garden’ has a variety of hospitality options; General (R395) or Summer Garden Festival (R695) where guests can spectate and celebrate from a beautifully curated, flower-themed area designed for a wonderful outdoor excursion in the heart of the city.