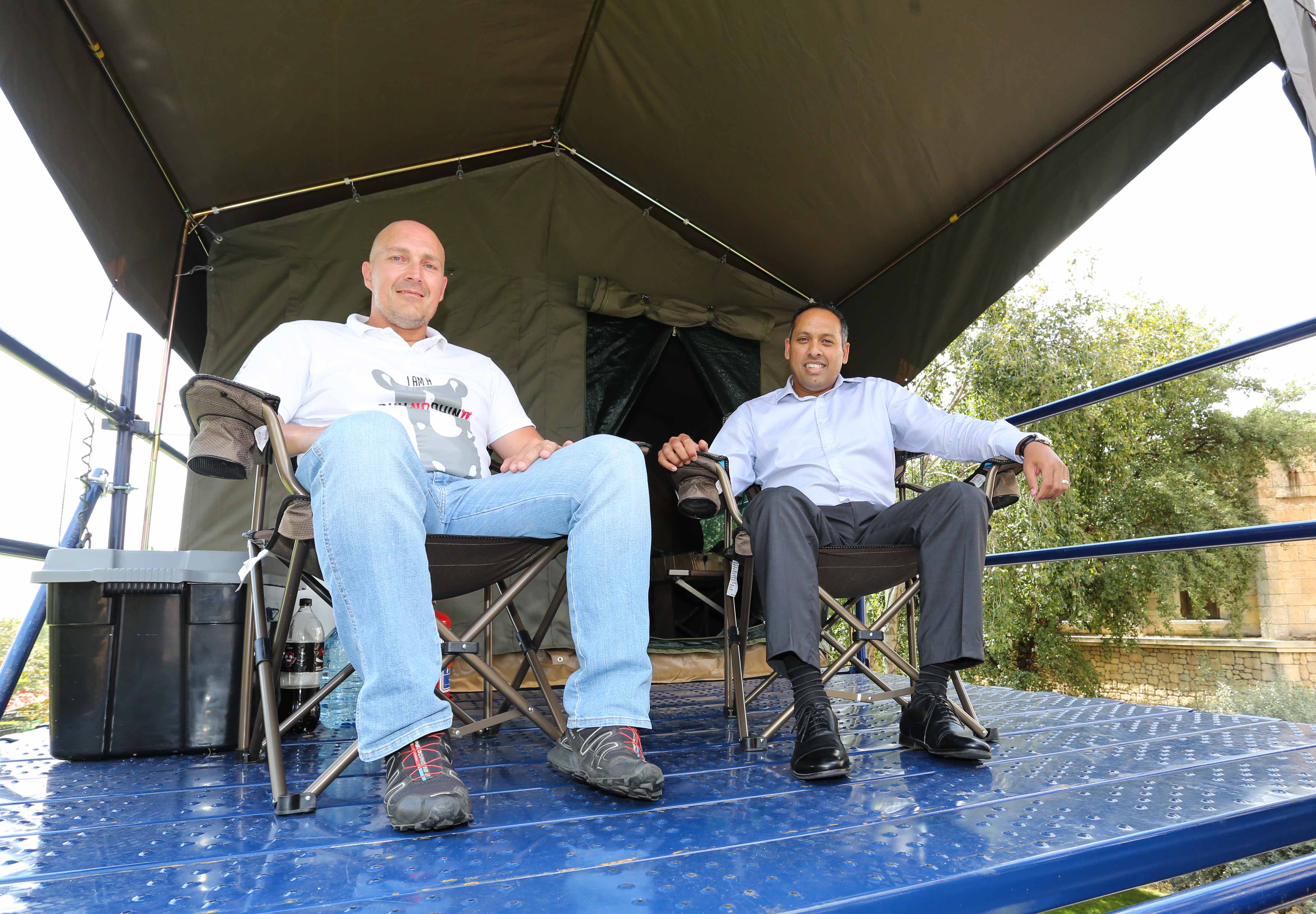 Wildlife activist, Anton Fouche will commence with his 32 day scaffold tower endurance stunt as a fundraising exercise for his George2Vietnam initiative, a “Wildlife Demand Reduction Campaign” geared at anti Rhino poaching. With the aim of raising R1 Million in 32 days, Fouche will make his way up the scaffold tower located at the Montecasino Bird Gardens at 12h00 on 22 March 2016.

“SA Scaffolding sponsored the tower and Tentco sponsored the tent where I’ll live for a 32 days”, says Fouche. “I will come down on the 22 April 2016 or after I will raise R1 000 000, whichever comes first”. ‘George the Rhino’ will be situated at the base of the scaffold tower for visitors to ‘meet’ and take photographs with George.

Anton has already pulled ‘George the Rhino’ over 2000 km across South Africa in the past 2 years for his original campaign: “Walking for Rhinos and Rangers”. George2Vietnam is a campaign consisting of three phases to send Anton and ‘George the Rhino’ to Vietnam on a powerful visual Wildlife Demand Reduction Campaign.

’George the Rhino’ is a life-sized fiberglass replica of a white rhino and is set on a wheeled trolley. George has 1213 red dots painted on him which represent the number of Rhino’s that were officially poached in 2014. Stopping at schools and public events, his awareness campaign was simply to visually demonstrate how many Rhinos are being poached.

After the money has been raised, Anton and ‘George the Rhino’ will travel around South Africa for two months in nine provinces. They will visit schools, malls and public events allowing South Africans in general to meet and take ownership of this campaign and add weight to his statement that ‘South Africans are sending George 2 Vietnam’.

Inspiration to take George to Vietnam came from Vicky & Vanessa Wiesenmaeir’s cycling expedition from Hong Kong to Singapore in 2015 called “Buy No Rhino”. Based on the success they achieved in educating people in Vietnam, Anton decided to follow their path, except to take ‘George the Rhino’ with as an additional visual educational aid.

The campaign falls under the DOT Foundation umbrella. Braam Malherbe, an international motivational speaker, a respected conservationist and the founder of the DOT (DO One Thing) Foundation endorses and supports this initiative very much. “The Foundation recognises applicants that are actively protecting threatened and endangered species. It’s aims to fund these initiatives to ensure longterm results”, says Malherbe and continues; “I founded The DOT Foundation because of the vital need to fund best practices in the conservation of our biodiversity. What Anton is about to do is a big DOT and hopefully each one of us will do his own DOT and support him. Together we can raise the money and help to save our rhinos.”

Patrick Cromwell from Awesome South Africans gave his support and assistance as well.

“I founded Awesome South Africans because of projects of this nature. We need to highlight the awesome people of South Africa, give their projects more publicity and generally increase the morale of SA with stories of inspiration and positivity”, says Cromwell.

Anton Fouche will be making his way up the scaffold tower, Tuesday the 22nd of March at 12h00, Montecasino Bird Gardens. The tower will be located at the entrance of the bird park.

“We are very excited to be welcoming Anton Fouche and ‘George the Rhino’ to Montecasino Bird Gardens. When it first opened in 2001, the bird park included an educational and rehabilitation centre and was primarily a “family-focused” entertainment offering. With the establishment of its own breeding facility In May 2010, it reached a new level of significance to conservation in South Africa and today is an important contributor to a number of preservation initiatives, including the Southern Ground Hornbill Project. We hope to inspire and encourage other businesses across all industries to do their part in contributing towards a more sustainable future whether implementing their own greening initiatives or supporting campaigns of this nature”, Glenn Joseph, General Manager, Montecasino.

If you wish to donate and support Geroge2Vietnam, please EFT to: