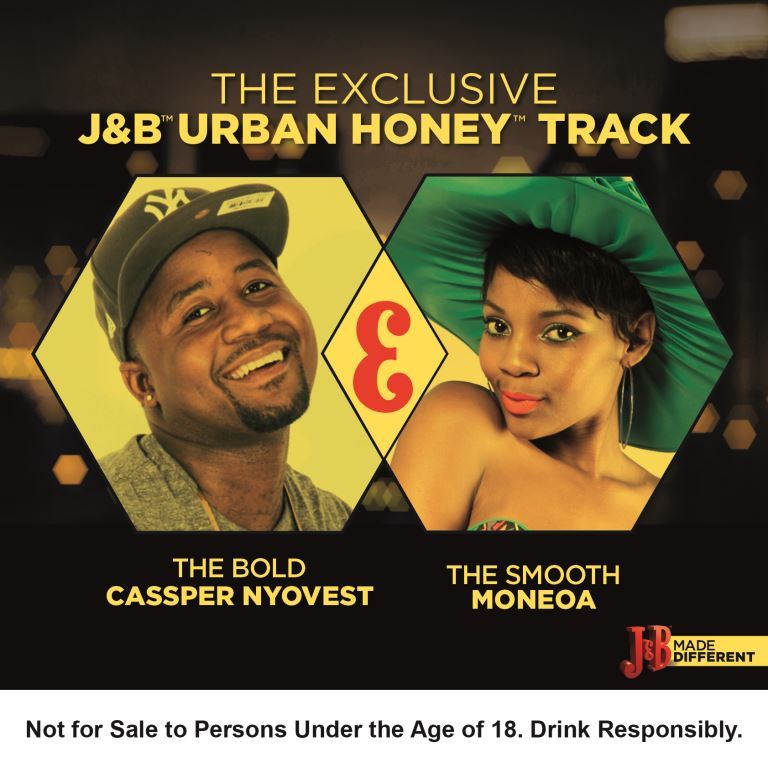 You’ve heard the rumours that Cassper Nyovest’s and Moneoa have been hard at work in studio creating something special…. here’s the low-down:

When J&B™ launched their newest creation, J&B™ Urban Honey, they wanted to prove that when two seemingly contrasting elements combine, they can create a magical taste experience. When J&B™ Whisky was combined with the flavours of honey, a unique, golden liquid was born.

To celebrate, and further prove their point, J&B™ Urban Honey challenged Cassper Nyovest and Moneoa to combine their unique talents to create something out of the ordinary and made for the mix. The result? Monate Fela a collaboration that’ll get you on your way up!

For a free download of the entire hot new track, all you have to do is buy a bottle of J&B™ Urban Honey, dial *120*1342#, punch in the unique barcode on the bottle and download the track directly onto your phone. You’ll also stand a chance to win a bunch of other exciting prizes! Oh yes, now you’re on your way up – as the lyrics to Monate Fela will tell you!

The exciting taste of J&B™ Urban Honey is best appreciated when frozen and served as a shot. But try it, too, with ice, a dash of pineapple juice or whatever mixer tickles your unique taste buds. After all, like J&B™, we’re all ‘Made Different’.

Cassper – real name Refiloe Maele Phoolo – was born on December 16, 1990 and grew up in Mafikeng, capital of North West province. Although very athletic at school, playing football, cricket and basketball, he dropped out at age 16 to pursue a musical career in Johannesburg. His big break came when Motswako rapper HHP spotted Cassper at a performance and featured him on Wamo Tseba Mtho on his album, Dumela. Since then he’s become one of the country’s brightest starts, winning numerous awards and nominations, including seven South African Hip Hop Awards, three Channel O Music Video Awards, and two YOU Spectacular Awards – in fact, 19 to date.

Born in Umthatha but raised in Durban, Moneoa’s roots were at the other end of the country from Cassper. A hugely talented singer and songwriter, she is poised to make the world her own. Although a professional dancer, Moneoa has a voice that glides across chords as swiftly as her feet through detailed choreography. Her voice is ‘paradoxically chilling, yet soothing’ and her feel-good music is an interesting blend of Afro pop and neo-soul, delivered with a rare vulnerability and emotion.

2 thoughts on “Get On Track With J&B™ Urban Honey”