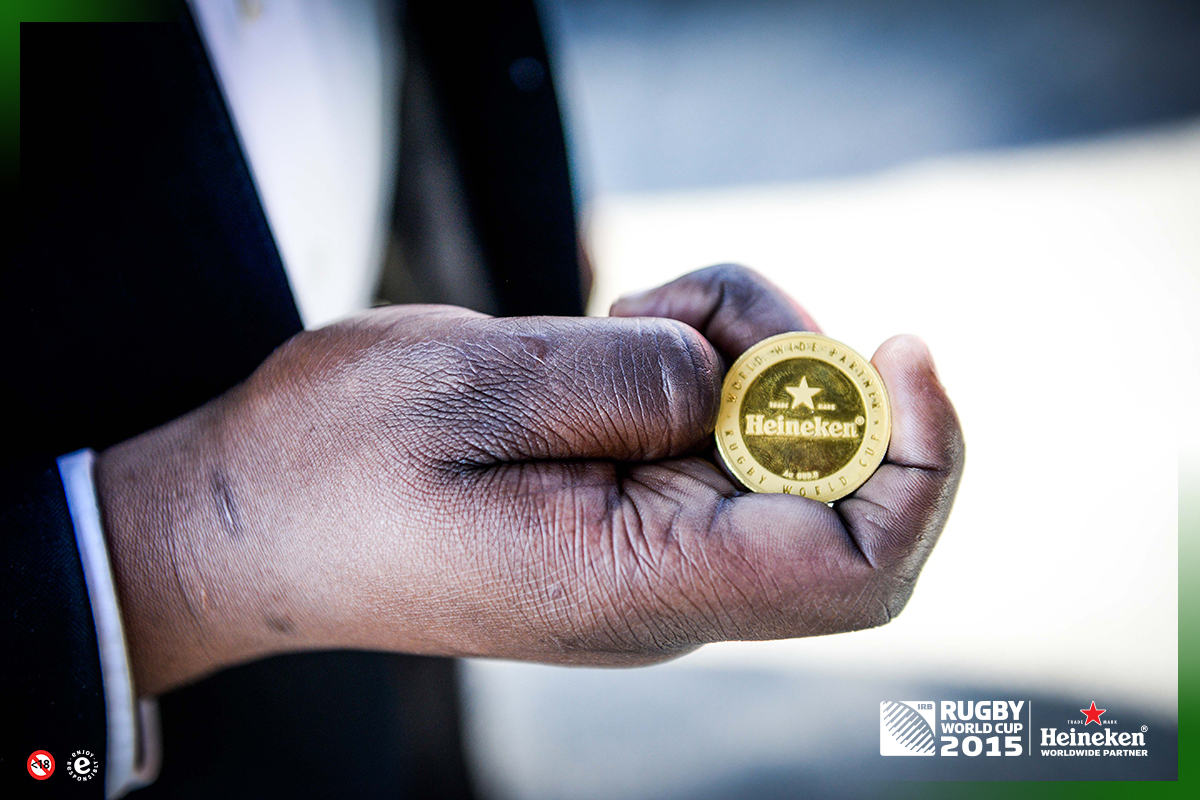 Every rugby game begins with the coin flip. The flip decides who kicks off as well as which half of the field each team will play. Jonah Lomu, perhaps the greatest ever rugby player and a Heineken Legend for the Rugby World Cup 2015, is emphatic in his assertion that the coin flip is an incredibly important game event.

“The coin flip is important as it decides a lot of things. One, it’s the mental edge in terms of it’s your first win, and that puts a tick in that corner. But also you decide how you want to start the game. If you’re a team that wants to physically assert your physicality on the opposition, you want to win the coin flip and you want to attack them. You can’t do that if they win the coin flip. So there is a tactic when it comes to that and the coin flip is a huge part of this. Heineken is giving this opportunity for the fans to get up close and personal. You can’t get any closer unless you are pulling on the jersey and playing.”

Heineken®, worldwide partner of Rugby World Cup 2015 brings rugby fans closer to the action with a competition to find 48 fans from around the world to win a once-in-a-lifetime opportunity to open a match by attending the official coin flip prior to the kick-off of each match.

The proud sponsor conducted a social experiment, to find out what most South Africans would call when given the chance to flip a coin, and just how accurate they would be.

The international premium beer brand conducted a tour of the country’s favourite social venues, flipping the coin with hundreds of South Africans. “If you think the coin flip is a 50-50 game of chance, you’ll be surprised by the results of our national survey,” said Tjeerd Veldhuis, Marketing Manager, Heineken® South Africa.

1. Heads you win!
65% of the participants called Heads rather than Tails and of those who chose Heads, 75% of them were correct.

2. Heads or tails – either way you’re more likely to be right than wrong:
Interestingly, even in the cases where the minority (35%) of people chose Tails, they were correct, on average, 60% of the time. So on average, 70% of participants called it right – whether they chose heads or tails.

The bottom line is, whether male or female, young or old, Jo’burg or Cape Town, the majority of people chose Heads (65%) and the majority of the time (75%) it was correct. The phrase ‘Heads You Win, Tails You Lose’ certainly appears to be true.

Unless, it seems, you’re a celebrity. A group of SA celebs participated in the social experiment by flipping a one-of-a-kind 24 carat gold Heineken® Rugby World Cup 2015 coin. DJ Euphonik, like the majority of South Africans, also called Heads, but unlike most, he got Tails. As did DJ Sphectacular and Naves, who also bucked the trend along with Tbo Touch and Paledi Segapo who both called Tails and got Tails.

The most important question, however, is – what will our captain Fourie du Preez call before South Africa’s next game against New Zealand? Heads or Tails?