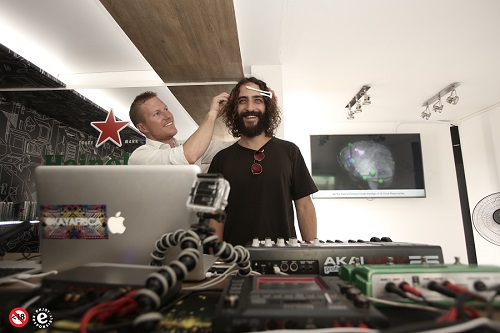 Last night, December 9th, visitors to the pop-up Heineken® Next Level Bar in Braamfontein got to #OpenNextLevel with a totally unique sensory experience dubbed Edible Music.

By combining a gastronomical chef, brilliant creative minds, Heineken® and a bit of fancy science, a way was found for people’s response to food stimulus to be translated into music. Cool, right?

It all started when Heineken® invited music producer Nicolaas van Reenen and chef Jade de Waal to embark on a next level sensory experiment. The aim: to convert flavours into measurable brain waves and translate these into sound waves to create music. To achieve this, Jade cooked up three taste profiles, with Heineken® as the fourth. Wearing an EEG (Electroencephalography) device, which measures the electrical activity on the surface of the scalp, Nicolaas was exposed to the various tastes and Neural Sense measured his emotional and cognitive response. Using the neurofeedback and biometric data from this session, Nicolaas then transformed the taste experience into a next level audio experience – turning brain waves and heart-rate waves into sound waves.

The experiment and outcome were so cool that Heineken® couldn’t give up the opportunity to let consumers go through the same process and have their unique sound waves added to the “neuro-soundscape” originally created by Nicolaas, which played as the soundtrack in the bar.

“The innovative bar, designed to emulate the sleek new 330ml Heineken® Cool Can, was developed as an intimate space for creatives to meet, collaborate and share experiences such as this. More next level experiences, activations and exhibits are planned over the next couple of days, until the bar closes on Saturday 12th December,” says Tjeerd Veldhuis (Marketing Manager, Heineken® South Africa).

The Heineken® Next Level Bar is now open and free to the public at Smit Service Street, Braamfontein, Johannesburg (GPS co-ordinates: -26.194651, 28.034776) until the 12th of December 2015 from 2pm till midnight, Tuesday to Saturday. For full details and programme, follow Heineken on Twitter (@Heineken_SA) and/or Instagram (@Heineken_SA). Heineken® Open Your World