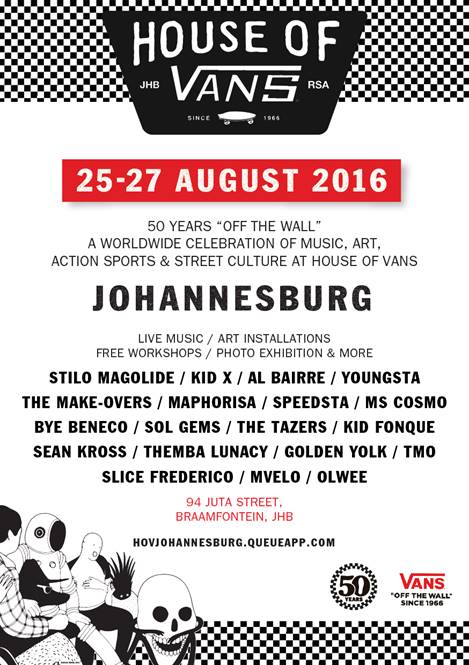 The House of Vans is where creative expression lives. It’s a place where imagination lets loose over skate obstacles, art installations, workshops and concert stages, inspiring every person who runs, rolls, or stomps through its door.

The House of Vans Johannesburg is excited to announce the addition of KiD X and Al Bairre to the stellar music lineup. Gates open at 19h00 on the 25th August at 94 Juta Street, Braamfontein. Vans friends, family and fans are invited to immerse themselves in the world of music, art and skateboarding.

Tickets are free, and available from: https://hovjohannesburg.queueapp.com/
Thursday 25th, opening night, will be hosted by MC Stilo Magolide, with music acts from Mvelo, Ms. Cosmo, Kid Fonque and DJ Maphorisa. A new addition to the lineup, from former Cashtime Fam notoriety, KiD X, is Thursday’s headline act which kicks off at 23h00.

Saturday 27th gets off to an early start with a skate event in partnership with Baseline Skate Shop at 13h00. DJ sets kick off at 15h00 with live music acts commencing from 20h30 with a solid lineup of South Africa’s most well versed artists: Youngsta, Stilo Magolide, Speedsta, Sean Kross and Vino.

Be a part of the three day festivities by participating in the House of Vans workshops, which include tote bag customisation, mug printing, photo booth and playing the Vans claw machine. There will be House of Vans merchandise available as well as food and drink on sale.

About House of Vans
House of Vans is a platform for creative expression that hosts art, music and skate events, with an emphasis on nurturing and inspiring the next generation. With permanent locations in two of the world’s most inspiring cities – London and New York – House of Vans brings to life the creative culture that lies at the heart of the brand to a broader audience through pop-up initiatives in cities such as Seoul, Berlin, Shanghai, Austin (Texas) and Guangzhou.

About Vans
Vans®, a VF Corporation (NYSE: VFC) brand, is the original action sports footwear, apparel and accessories brand. Vans authentic collections are sold globally in more than 75 countries through a network of subsidiaries, distributors and international offices. Vans also owns and operates more than 450 retail locations around the world. The Vans brand promotes the action sports lifestyle, youth culture and creative self-expression through the support of athletes, musicians and artists and through progressive events and platforms such as the Vans Triple Crown of Surfing®, the Vans U.S. Open of Surfing, Vans Pool Party, Vans Custom Culture, Vans Warped Tour®, and Vans’ cultural hub and international music venue, the House of Vans.