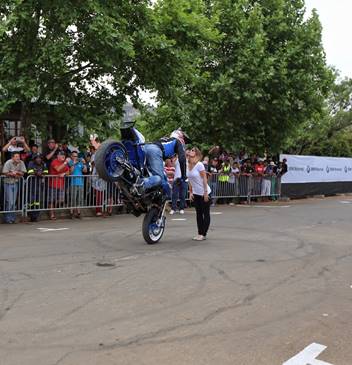 Clarens, Free State. – The inaugural BMW Motorrad Days South Africa was successfully launched this weekend as just under two thousand people descended on Clarens, also known as the Jewel of the Eastern Free State, for three days of motorcycle and music action. Festivities kicked off on Friday morning to the roar of motorcycle engines filling the valley as riders from all corners of the country rode in to enjoy the programme of events, which lasted late into the night.

By Saturday morning the streets of Clarens were bustling with all makes and models of motorcycles, as motorcyclists, enthusiasts and curious bystanders from all walks of life soaked up the vibe of South Africa’s unique music and motorcycle festival. Stealing the show was international Street Bike Freestyle Rider, Mattie Griffin, who thrilled audiences with his daredevil stunts throughout the festival.

When they were not out on rides enjoying the glorious scenery of the Golden Gate and surrounding areas, or experiencing the enduro off road course, festival goers headed to the main square to browse the stalls for motorcycles and accessories, enjoy the gourmet food from the various food stalls or have a refreshing drink in the beer garden while watching live entertainment. The weekend line-up included Die Heuwels Fantasties, Mean Mr. Mustard, Ard Matthews (Just Jinjer), DJ Bon Tempo, CrashCarBurn and local rock band Rooibaardt.

Two lucky festival goers walked away with the BMW F 800 R and the BMW R nineT respectively, after their names were drawn in the BMW Motorcycle Lottery which was open to all ticket holders.

“Seeing months of planning come to fruition is an incredibly rewarding experience,” says Alexander Baraka, General Manager of BMW Motorrad South Africa. “The first BMW Motorrad Days South Africa exceeded our expectations and the feedback we have received from participants, festival goers and the local community has been overwhelmingly positive. We are committed to growing this into South Africa’s biggest premium music and motorcycle festival.”

Baraka says that the event would not have been possible without the support of the motorcycle community who attended, the Clarens community, BMW dealers and BMW Clubs.

Businesses in Clarens and surrounding areas benefited from the influx of visitors over the weekend with accommodation in Clarens and surrounding areas reportedly fully booked during the course of the weekend. BMW Motorrad Days South Africa is endorsed by Thabo Mofutsanyana District Municipality, who were on hand to share visitor information on the variety of experiences to be had within the region of the Eastern Free State.

About BMW Motorrad Days
BMW Motorrad Days is a motorcycle event that celebrates the BMW Motorrad rider lifestyle – but is open to all riders from all walks of life. The South African edition will be based on the internationally successful BMW Motorrad Days that has been held in Germany for the last 14 years and attracts over 40,000 people annually.