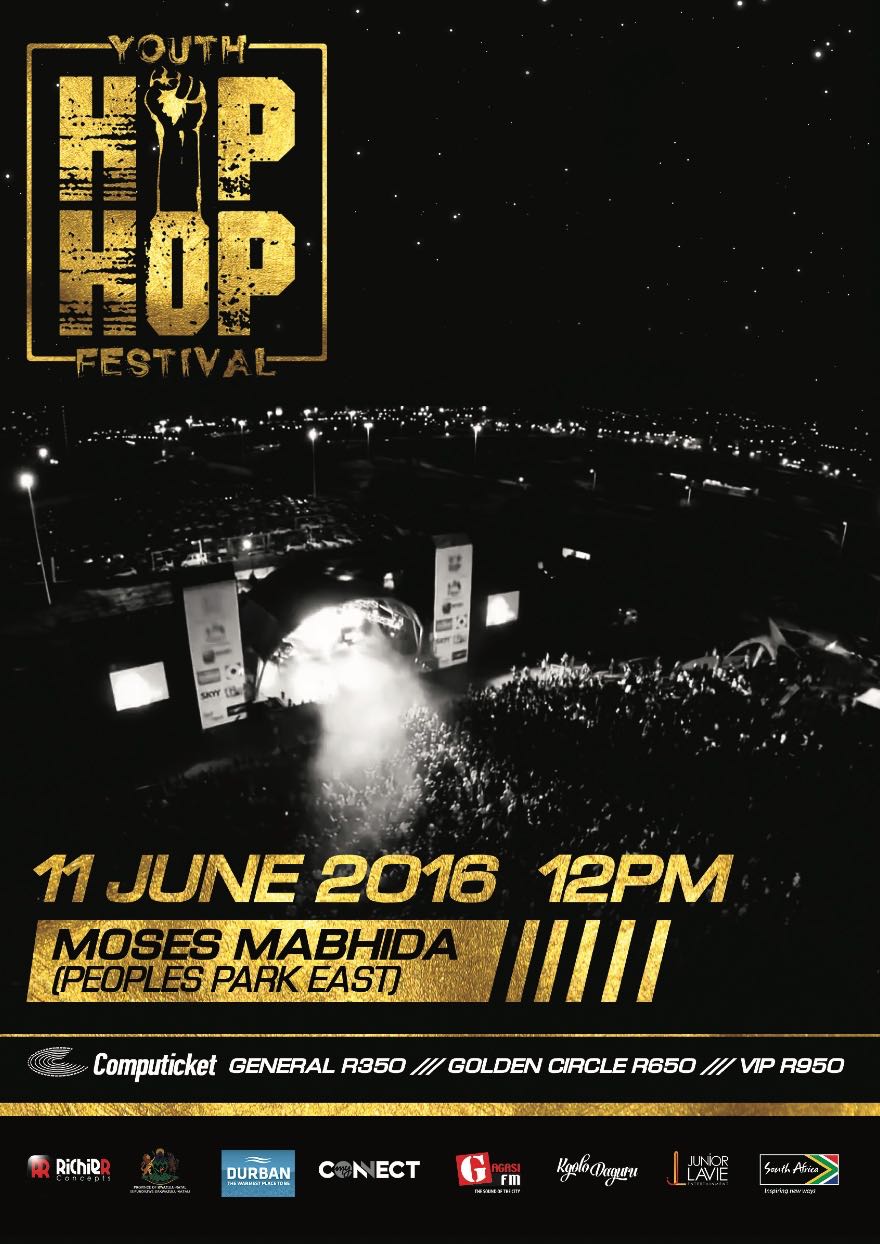 Now in its third year, the annual Hip Hop Youth Festival, taking place on the 10-11 June 2016, has expanded to include a youth talent development programme whichseeks to discover and nurture young musicians looking to break in to the highly competitive South African hip hop industry. Richie R Concepts, Established Productions and KgoloDaGuru who are committed to finding new talent across the KwaZulu Natal Province will spearhead this mammoth task.

The artist development programme was launched in April at the BAT Centre in Durban. Auditions were held to unearth fresh South Africa talent in the Kwazulu Natal province. The search is on for young hiphop Vocalists, Rappers, MCs and DJ’s, with the intent of discovering South Africa’s next hip hop sensation.

This youth development programme culminates into a two-day festival, which takes place on Friday 10th June and Saturday 11th June. On the first day of the festival, top industry players will host a series of workshops focused on empowering young musicians in the province. The second day of the festival a collective of these young musicians will get to perform alongside some of South Africa’s top artists at the all-day youth concert.

South Africa is home to an eclectic arts and culture sector, and hip hop forms a critical component of the arts industry in the country. This can be seen in, amongst others, the first local musician to sell out one of the biggest concert venues in the South Africa. The National Development Plan points out that the creative and cultural industries can substantially contribute to small business development, job creation, as well as urban development and renewal, which in turn improves South Africa’s competitiveness. This is why the Youth Hip Hop Festival has broadened its objectives to include the artist development programme.

Representatives from the KwaZulu Natal Provincial Government and Durban Tourism today stated, ‘The discovery of new skills is a key priority of the KwaZulu Natal Province. At times youth’s passion for music and softer skills are discouraged in our communities. The value of the arts to social development and economic growth is often understated. The Youth Hip Hop Festival will discover, nurture and empower talented and tenacious young people keen to pursue a career in the arts. We are proud to be involved again this year’.

Twenty-four artists emerging from the artist development programme will share the stage with South Africa’s top hiphop artists at the main event. The line-up for the festival includes over twenty headlining local artist and DJ’s along with an International act. Also in celebration on the South African Music Awards also taking place in the city, the Best Hip Hop SAMA21 winner will also perform at this years festival at Moses Mabhida Stadium in Durban, alongside the long list of hip hop greats.

Following the main event, ten artists groomed through the development programme will be selected to represent South Africa at an American Music Festival in October 2016. The journey of these young emerging artists can be followed on the TV series MY CONNECT – ROAD TO THE CMJ, to be airedon a national broadcaster after the festival.

With the hope of attracting over 25 000 youth, organisers of the 3rd Youth Hip Hop Festival will work hand in hand with The KwaZulu Natal Provincial Government, Brand South Africa and media partners Gagasi FM and Channel O.

Part of the line-up includes Riky Rick, Major League, Junior De Rocka and WTF. The long list of other confirmed artists to be announced on Gagasi FM and social media each day over the next week, so stay tuned.

The full lineup will be released next Wednesday.