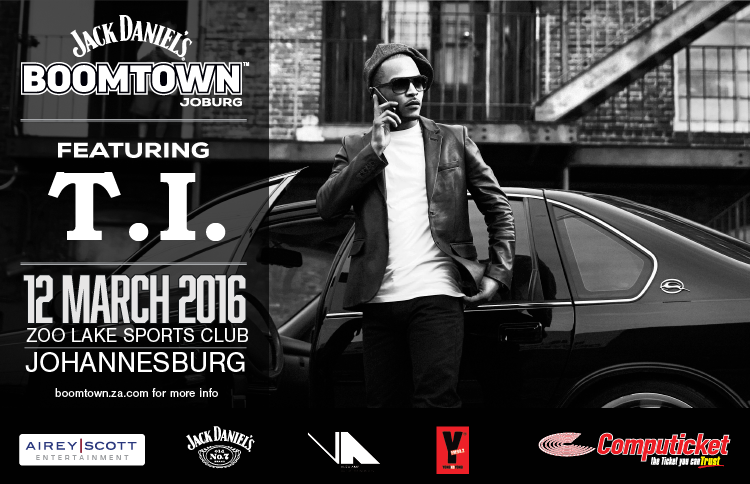 Johannesburg, Wednesday 3 February 2016– The most anticipated lifestyle event of 2016, Jack Daniel’s Boomtown, presented by Airey Scott has added a spectacular list of top South African artists to the bill of the HOTTEST Lifestyle Festival at Zoo Lake Sports Club on 12 March 2016.

Jack Daniel’s Music Scouts 2015 winner, Stones and Bones will be performing live, as part of their winning prize as winners of :Jack Music Scouts 2015. ”This talented duo were mentored and selected by fellow performers K.O, DJ Culeo De Song and DJ Speedsta from 6000 enteries last year”

David Airey from Airey|Scott says, “I am sure everyone will agree that this is a star studded South African line-up. The Jack Daniel’S Boomtown experience is not just a concert., it is a day turns into night, come dressed in your best, home grown and sophisticated music & lifestyle festival, of which South Africa`s top artists are central to this experience”.

Headlining the event, will be the international hip hop, multiple award winner T.I. This international hip-hop icon has never performed in South Africa or on the African continent before and will perform tracks from a variety of his 9 Studio albums. T.I is a multi-platinum artist with sales of more than 30 million singles, and 14 million albums. On his meteoric rise to global fame he has collaborated with other such marquee artists as Jay Z, Rihanna, Justin Timberlake, Robin Thicke, Lil Wayne, Lady Gaga, Drake and Kanye West.

Jack Daniel’s Boomtown has established itself as the country’s leading lifestyle and music experience celebrating international and local hip-hop, urban, and house culture.

Jack Daniel’s Boomtown Joburg, will be all that was experienced at the Vodacom Durban July last year, except without the horses! Jack Daniel’s Boomtown combines premium hospitality in a beautiful outdoor venue conveniently located in the middle of Joburg! Raised VIP Hospitality decks, incredible Stage and Sound infrastructure, and different zones will combine together to create an experiential world.

The dress code is stylishly smart. Doors open at 13:00.

Jack Daniel’s Boomtown tickets are on sale now at Computicket. For hospitality and group bookings, contact the Airey Scott offices on 031 566 2720.

Jack Daniel’s Boomtown is your best new music and lifestyle experience in 2016.

Enjoy Responsibly. Not for Sale to Persons Under the Age of 18