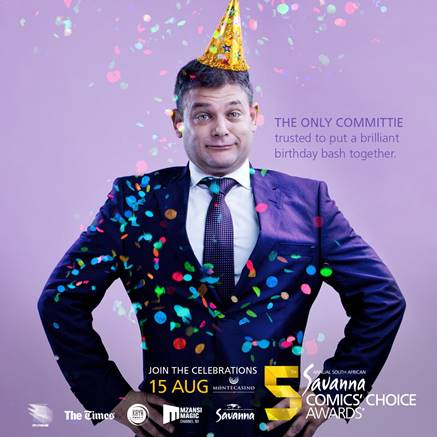 We’re gearing up for the biggest comedy event of the year
The 5th Annual Savanna Comics’ Choice Awards ®
With support from Mzansi Magic, The Times and Kaya FM 95.9

Everyone and anyone in the comedy industry will be flashing their biggest smiles and delivering their funniest lines at the country’s longest-running comedy awards event this Saturday at the Teatro at Montecasino. It’s going to be a hilarious variety show, comprising sketches, stand-up, impressionists and witty one-liners delivered by SA’s top comedians. Alan Committie will add his creative genius to the show as the award’s Show Director.

The Savanna Comics’ Choice Awards honours registered comedians across nine categories and both comedians and the comedy-loving public will find out on the night who will walk away with the coveted Waldo statuette.

Get your tickets now
Limited tickets are still available to the public, so book now through Computicket: http://online.computicket.com/web/event/savanna_comics_choice_awards/907680777/0/65161436

All seats are R280 and include access to the official after party.
The after party is going to be at one of JHB`s top function venues, THE ARENA.
Located at Shop 1 & 2 Design & Decor Centre, Corner of Sunset Avenue & Forest Road, Fourways, a mere 500m quick drive from Teatro.
Safe parking available at the venue.

The Savanna Comics’ Choice Awards® thanks the support of partners Mzansi Magic, The Times and Kaya FM 95.9 for helping build comedy history.