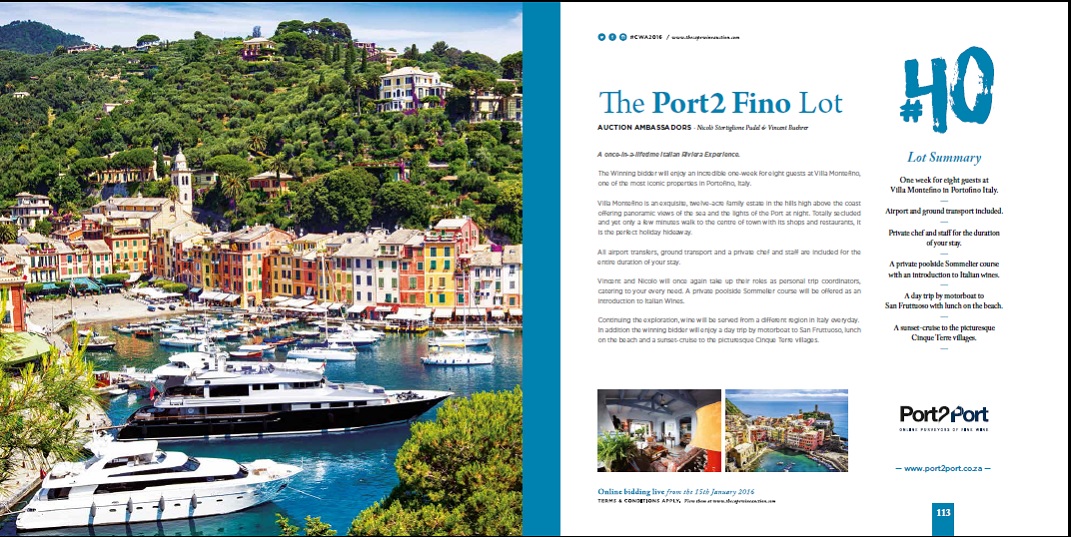 The AfrAsia Bank Cape Wine Auction, South Africa’s biggest fund-raising event, has announced 40 extraordinary Auction Lots that will be the source of both intense bidding and generosity when the event takes place at Klein Constantia Estate, Cape Town, on 12 and 13 February 2016.

Created by the event’s winemaking ambassadors, included are the 1800 Jaubert Family Muscat vintage, the first and only 99 Parker rated wine in South Africa, as well an expansive six vintage vertical 18 magnum collection from Kanonkop Estate and a signed collection of the Ouwingerdreeks collaboration between Eben Sadie and William Kentridge. On offer are instant rockstar collections of iconic wines, luxury travel with Meerlust on Rovos Rail, stay at Raymond Blanc’s Belmond Le Manoir aux Quat’Saisons with Vilafonté, trips to Portofino with Port2Port, the quintessential Stellenbosch Experience and a trip for 8 people to Paris and St Tropez. Enter a world of rare collectibles and insider wine industry experiences never offered by the South African wine industry before.

The Cape’s oldest wine region, The Constantia Valley, will also be well represented by the majority of wineries participating solo and jointly in a unique Constantia wine experience.

“We took great measures to secure an amazing catalogue of Lots. We are sure they will delight our guests, and we’d like to thank our ambassadors for raising the stakes for yet another year,” says Cape Wine Auction Trustee, Mike Ratcliffe.

Some of the other deluxe standouts of the Auction Lots include business class tickets to Mauritius, Paris and the UK; and stays at the Red Carnation Hotel in London, a luxury apartment in Paris, a French boutique hotel in Burgundy, villas in Tuscany and a chateau in France. Other highlights include 225-litre wine barrels; weekend stays featuring seven course dinners and wine tastings; and an Ernie Els Wine cross-country golf trip.

At the AfrAsia Bank Cape Wine Auction 2016, wine enthusiasts from far and wide will be wined and dined with rare, coveted wine collections and gourmet food prepared by a shortlist of handpicked chefs under the watchful eye of Relais & Châteaux Grand Chef Peter Tempelhofff, while the sophistication of both the historical setting and the experience will no doubt ensure the success of the initiative.

At the 2015 AfrAsia Bank Cape Wine Auction, R10.6 million was raised, catapulting the event’s status to that of the most successful philanthropic event in South Africa. Every cent raised, without offset or deductions, is added to the Cape Wine Auction Trust and given directly to charity.

“Next year the 19 beneficiaries of the trust will collaborate on the effective usage of the funds with the aim of utilising the strengths of their respective organisations to collectively embolden and elevate the education of underprivileged youth in the Cape Winelands,” adds Ratcliffe.

Trustees, in conjunction with PriceWaterhouseCoopers are responsible for the allocation and monitoring of charitable funds raised. The purpose of the trustees is to guide the allocation and channeling of funds and to maintain complete transparency in all of the procedures.

About the AfrAsia Bank Cape Wine Auction
Exquisite wines, incredible food and VIP access to some of the most beautiful private locations in the Western Cape. The Cape Wine Auction is not only the chance to buy exceptional, once in a lifetime experiences, but it’s all for a very good cause. Over and above the Auction itself, there is also a Friday night ‘Barrel tasting & Auction’ sponsored by American Express Centurion and hosted by Constantia Glen where guests have a chance to taste from 20 hand-selected barrels with the individual winemakers, and then place a bid on a case.

The 2015 AfrAsia Bank Cape Wine Auction, which took place on Saturday 14th February this year ascended to new heights when an astounding R10.565 million was raised for education in the Cape Winelands, achieving a significant 50% increase on the R7.045 million raised at the inaugural 2014 Auction.