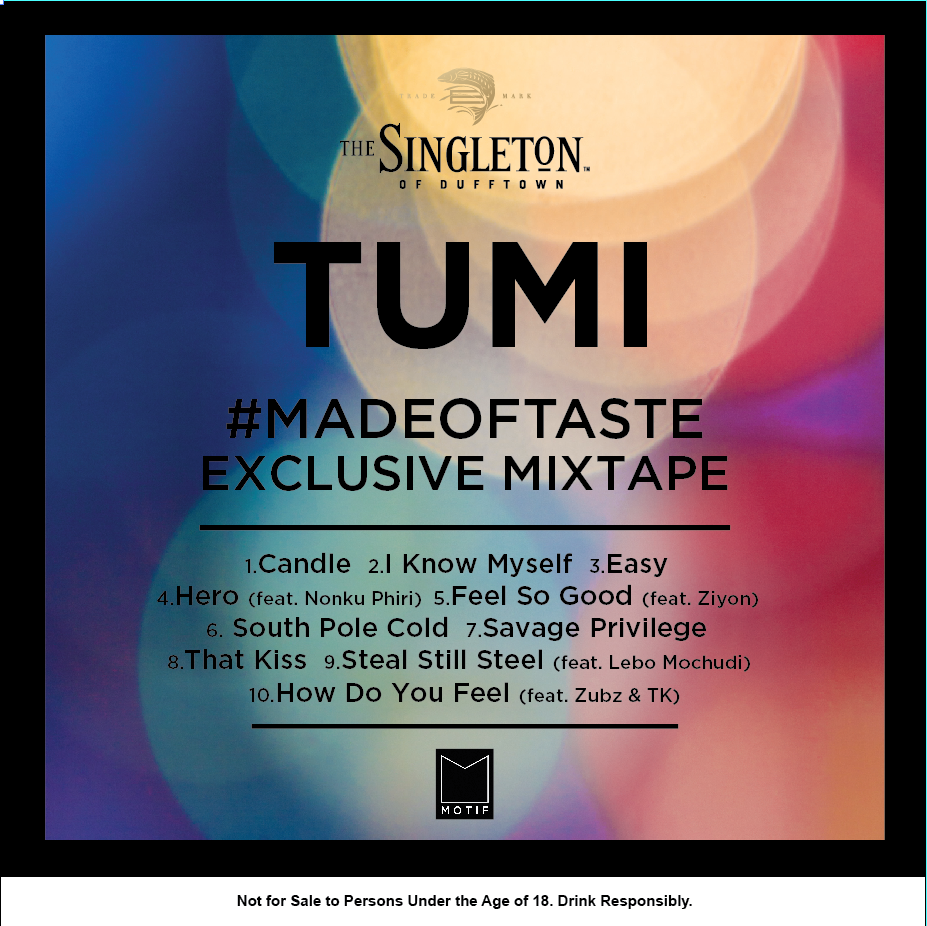 Artist swims against the stream by previewing tracks at Singleton launch

On the back of a sneak preview performance of tracks from his new album at the Singleton of Dufftown and Tailfire launch in Johannesburg, Tumi Molekane announced he would be releasing a track a day over the next two weeks beginning on May 18 as part of an exclusive mix tape collaboration with The Singleton single malt whisky.

The innovative release strategy is also a first for the South African market with each of 10 tracks being made available for free streaming on SoundCloud, between Mondays 18 May to Friday 29th of May. Tumi will also be doing two podcasts on the tracks talking about his motivation for creating them and the collaboration.

“Tumi’s performance at the launch was nothing short of sublime. His sound is both captivating and provoking and as an artist he swims against the stream, which has enabled him to set himself apart not only within the genre of Hip Hop but as a local musician. This type of innovation and dedication to his craft is what made him the perfect person to partner with The Singleton” Brandhouse Reserve marketing manager Avukile Mabombo said after the event.

Singleton, recognised as the world’s best tasting single malt whisky, adopts a similar philosophy of innovation and excellence. The April 22 launch event – themed #MadeOfTaste – was designed to give South Africans a fresh perspective on the spirit and to showcase the brand’s vibrant, forward-looking approach.

Having achieved critical acclaim as the MC in front of the band Tumi and The Volume, Tumi has specially curated previously unreleased musical pieces featuring some of the countries top talent including Ziyon of Liquideep fame, Nonku Piri and Lebo Mochudi to name a few, the #MadeOfTaste mixtape will again see him push musical boundaries building up to the launch later this year of his third solo, studio album “The return of the King”

“From the beginning I always wanted to have freedom to do what I felt like doing. Whether it’s that I’m provoked by an idea, inspired by or just titillated by it, the fact that I’m able to do it makes me explore and find something new” said Tumi.

Occupying a unique space in the music scene, the rapper and poet is a highly influential artist, crafting rich, thoughtful lyrics with a socially conscious message set to an accessible and appealing sound.

“We are delighted to be able to support and celebrate South African artists who epitomize unique, exciting music and lyrics” added Mabombo. “Tumi is undoubtedly such an artist.”

Brandhouse Beverages (Pty) Ltd was formed on 1 July 2004 as a joint venture between Diageo, Heineken International and Namibia Breweries Ltd. It is South Africa’s leading premium drinks company with an unrivalled portfolio of brands across the spirits, beer and cider categories. These include Johnnie Walker, J&B, Smirnoff, Bell’s, Baileys, Jose Cuervo, Tanqueray, Captain Morgan, Amstel, Heineken, Windhoek, Foundry, and Guinness among others.