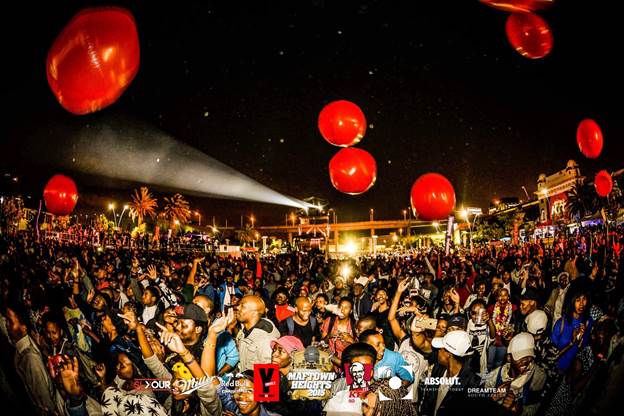 The documentary covers the Maftown Heights story from its humble beginnings in 2010 with an audience of 900 people to being Africa’s second largest hip hop festivals which saw an audience attendance of just under 10 000 people in 2015.

Maftown Heights was created out of a desire for Khuli Chana to create a platform in Johannesburg, where he resides, that celebrates the greatness that has emanated from his home town Mahikeng. Mahikeng is the birthplace of what is now the largest sub-genre of hip hop in South Africa, Motswako.

The moment that stole the show at #MaftownHeights15! Thanks for being a good sport about it L-Tido! Don't miss our #MaftownHeightsSpecial documentary airing this Friday 29th Jan at 5pm (repeat Sun 31st Jan at 1pm) on Channel O!

Maftown Heights was co-founded by Khuli Chana and Dream Team SA Director, Refiloe Ramogase, to bring the idea to life through music and giving a platform to artists with Motswako roots, as well as to artists that have collaborated with and/or supported Motswako artists in one way or another.

Since Maftown Heights’ inception in 2010, artists such as Khuli Chana, Cassper Nyovest, AKA, TKZee, HHP, Tuks, Mo Molemi, JR, Thebe, Skwatta Kamp, Cashtime Fam, Tumi Molekane, Fifi Cooper, Towdee Mac, Lection, Notshi, Magesh, Reason and Pro, just to mention a few, have performed on the Maftown Heights stage. Some were complete under dogs at the time when they first performed at Maftown Heights and have since gone on to become household names in South Africa and on the continent.

Maftown Heights is considered to be premier hip hop calendar event for both artists and fans alike. This is because the festival provides a world class stage, complete with all the bells and whistles of top notch production, to both established and developing artists alike.

Maftown Heights Special documentary airs at 5pm this Friday, 29 January 2016, on Channel O and repeats at 1pm on Sunday 31st January 2016. Make sure to watch as we unravel the story of Maftown Heights over the past 6 years! Set your reminders and save the date!

Besides celebrating Motswako as a genre, the festival is a key platform in showcasing both South African and African hip hop at large, such as having the likes of Burna Boy and Ice Prince perform on stage in previous years. Maftown Heights continuously seeks to build a bridge between hip hop and other musical genres, by inviting the likes of The Parlotones, Goapele, Mafikizolo and MuZart to perform over the years.

You don’t want to miss the Maftown Heights Special documentary on Channel O, that unravels the Maftown Heights story over the past 6 years with insights from various artists that have performed at the festival as well as from its co-founders, Khuli Chana and Refiloe Ramogase.