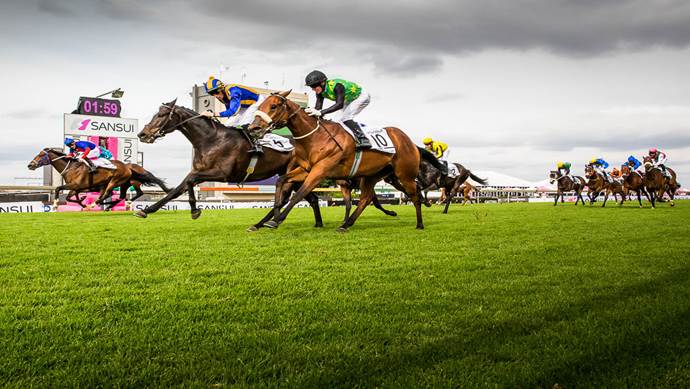 It was an unforgettable day of high fashion, entertainment and socialising, capped by one of the greatest thoroughbred training feats of all time. Elegant race-goers gathered for a classic day’s racing at Turffontein Racecourse, South of Johannesburg on Saturday.

A perfect prelude to the pinnacle of the festive season, the highlight of the day of course came in the form of a well-deserved win for Master Sabina who won the premier R2 million Gauteng SANSUI Summer Cup 2015 under a brilliant ride by Champion Jockey Gavin Lerena. He edged out his stablemate Deo Juvente and this result completed one of the finest training feats in South African history as trainer Geoff Woodruff had repeated his first and second finish of last year, having had the first three past the post the year before. Today his pair just held off the favourite, the Sean Tarry-trained topweight French Navy. Master Sabina later had to survive an objection by his stablemate Deo Juvente. The objection was speedily overruled.

As much a celebration of big hats and fashion as the competing horses, Master Sabina, who finished second two years ago, finished the 2000 metre race in a time of 122,55 seconds to earn a staggering first cheque of R1,2 million. It was the cherry on top of a day of fashion and fun. Deo Juvente was 0,2 lengths behind the winner and and French Navy was only 0,6 lengths behind the winner in third. Last year’s third-placed horse Judicial finished fourth and the fancied Mac De Lago finished fifth.

The Gauteng Sansui Summer Cup is arguably South Africa’s longest surviving horse racing event and was first run as the Johannesburg Handicap in 1887. Over the years, the race has evolved and grown in stature to become one of South Africa’s premier thoroughbred stakes races.

Known for attracting the who’s who of South Africa – from politicians, corporate bigwigs to Gauteng’s horse-happy gentry, not to mention a bevy of some of South Africa’s most loved sports and showbiz personalities – this time around the Gauteng SANSUI Summer Cup was as much an excuse for parting on race day as it was for hard core race crowds who are always ready to cheer, anoint and celebrate the winner.

Dressed up in their best attire, in line with this year’s theme “More Jozi”, thousands of horse racing enthusiasts witnessed some of the country’s greatest horses at the SANSUI Summer Cup.

Chris Dirks, spokesperson for SANSUI South Africa said: “This was our seventh year of coming on board as one of the partners of the Gauteng Sansui Summer Cup. Most importantly we would like to thanks thousands of Gautengers and visitors from other provinces for taking time out of their busy schedules to come and experience what the Summer Cup has to offer. The Sansui Summer Cup is one of the oldest races in Johannesburg and since our partnership with the race, there has been a phenomenal growth in the number of people attending the race, and this year was no different. We humbly thank you for your patronage thus far and we look forward to your continued support in the future,” said Dirks