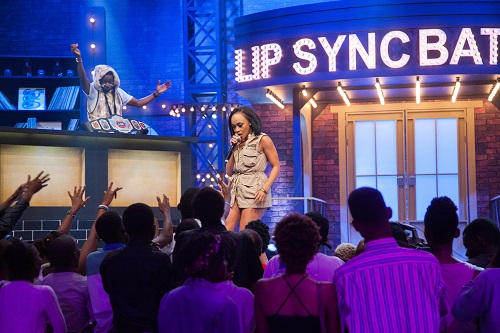 Expect a hilarious catfight as the two gorgeous sex kittens and queens of the airwaves let down their hair and sharpen their claws in their bid to become this week’s Lip Sync Battle Africa champion.
Using their acting skills to the max, it’s gloves off as the winsome twosome enlist get down, get dirty and get involved, using everything from sexy costumes to writhing on the floor and shaking their *****es for the eager crowd.

Heard on Metro FM every weekday from 8:00 am to 10:00 am weekdays, Lerato is currently flying high as the new Live Amp presenter, while Thando juggles her 5FM DJ-ing duties with regular appearances in Generations: The Legacy as township-girl-made good “Nolwazi”.

Speaking about her involvement in the show, multi-talented Lerato said, “People must expect the unexpected! People tend to think they know me until they find out that I have a trick up my sleeve. I’m very unpredictable, something that made it so much fun to shoot this episode. Viewers are in for a treat. I’m sure people don’t even know that I can dance! I am Wonder Woman“.

Added Thando, “’It has always been a dream for me to be part of Lip Sync Battle and it was so exciting to participate in the show. I’m very competitive and I don’t like losing, and I don’t know how to sing but I think this actually worked in my favour on this occasion!”
Lip Sync Battle Africa is hosted by entertainment goddess Pearl Thusi with colourful commentary from “koko master” and Nigerian Afrobeat star, D’Banj. The first episode of the series kicked off on 14 April with the ultimate battle between former flames Cassper Nyovest and Boity Thulo.