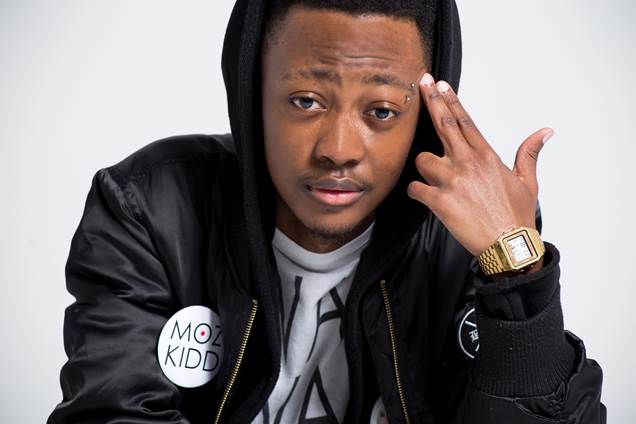 Johannesburg, Monday, 15 August 2016 – Moz Kidd, drops his debut mixtape aptly titled, What Were You Doing At 19? This 19 year old law student pushes the boundaries yet again by debuting his mixtape after the highly successful release of his hit single I Wanna Know featuring Riky Rick.

Download What Were You Doing At 19? Mixtape here: http://www.mediafire.com/?aa2e7wrvoyr1o4d

Stream What Were You Doing At 19? Mixtape here: www.soundcloud.com/mozkidd/sets/what-were-you-doing-at-19

Moz Kidd’s What Were You Doing At 19? Mixtape is a 14 track offering that covers the genres of Hip Hop, Rap and R&B. The Mixtape features Riky Rick, Blaze & DJ Slick and is a selection of music that Moz Kidd personally put together from a catalogue of over 40 songs that he has recorded with his producer ReggieBeatz.

“I decided to release a full body of work in the form of a mixtape because I started feeling that the singles I had released to date had “boxed” me in as I would usually pick a single based on which song I think people will like the most or let me rather say, which song they could “groove” to the most and then what happens is all the singles end up sounding similar but with this project I decided just to be myself and record what I like and relate to how I was feeling at the moment. I loved that” expresses Moz Kidd. He further goes on to add: “My fans on social media have been begging me to release new material so I also felt that after the long wait, nothing would satisfy them more than a full project instead of just a single or just a video.”

Moz Kidd is proving that he is a rising artist to watch out for and will definitely be a forced to be reckoned with in the music industry. This unsigned 19 year old artist from Nelspruit, Mpumalanga, now living and studying in Johannesburg, is paving the way for other young musicians who only dream of one day collaborating with artists such as Riky Rick whom he drew influence from growing up.

This is definitely not the last you will hear from Moz Kidd. Expect a new single and video to be released nationwide from the mixtape between now and September. Keep posted to Moz Kidd’s social media platforms for more info.