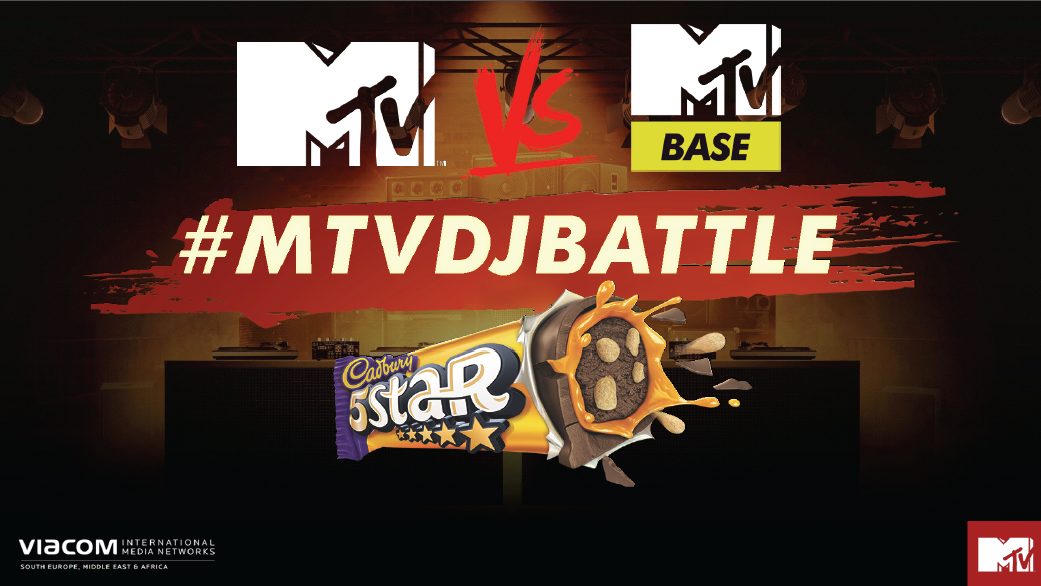 MTV DJ Battle is a musical showcase and TV show that celebrates the art of DJ-ing by testing the skills of the nation’s hottest DJs. For each ‘battle’ there will be two teams of 3 DJs, representing MTV and MTV Base respectively, with MTV captained by DJ Vigilante and Heavy K at the helm of the MTV Base crew. Each team will be lined up against each other in a series of deck-to-deck battles as they strive to out-mix, out-play and out-party each other. Wild card challenges are also thrown into the mix and the audience decides who wins.

In addition, Cadbury 5Star is giving one lucky music fan and 4 friends the chance to win the ultimate DJ Experience. All you have to do is visit www.cadbury5star.co.za to earn five stars and stand a chance to win an exclusive DJ Master Class with one of the DJ Battle captains, plus a set of 5 tickets to the finale of the MTV DJ Battle. Tell your friends: the more you enter, the better your chances are of winning! The competition starts on Monday 8 August and ends at midnight on 21 August.

Monde Twala, VP, BET, Youth & Music, Viacom International Media Networks (VIMN) Africa commented, “We are delighted to initiate the second edition of DJ Battle in conjunction with Cadbury 5Star. DJ Battle is a hugely popular, imaginative and engaging live event and multimedia experience and we are thrilled to bring it back to South Africa.”

“With the chewylicious Cadbury 5Star chocolate being so well received by young South Africans since its launch, the opportunity to collaborate with another youth lifestyle brand like MTV/MTV Base could not be missed,” says Grant van Niekerk, Mondelez SA Category Lead for Chocolate. “By sponsoring the DJ Battle we hope to give consumers a liberating and memorable 5Star experience.”

The first edition of MTV DJ Battle will take place at Carfax, Newtown in Johannesburg on Saturday 27 August 2016. Tickets will be available online from end July on Computicket with prices starting at ZAR 100.

For more information on Cadbury 5Star, save our number on your mobile phone then send us a WhatsApp message saying “Gimme5Star” on 083 966 0338. Alternatively, please follow Cadbury 5Star on snapchat using Cadbury5StarSA or like the Facebook page on www.facebook.com/Cadbury5StarSA and other social media platforms using the hashtag #Gimme5Star.

About DJ Battle
Pioneered by MTV/MTV Base in Africa in 2015, the first African edition of DJ Battle took place at Carfax, Johannesburg on 16 September 2015 and saw DJ Tira, DJ Zinhle and DJ Vigilante represent MTV Base while DJ Shimza, DJ Cndo and DJ Kenzhero competed on behalf of MTV.

About Mondelez South Africa
Mondelez South Africa is the largest confectionery business in South Africa, enjoying market leadership in the chocolate, chewing gum and bubble-gum categories. The company’s portfolio includes some of the largest snacking brands in the world, such as Cadbury Dairy Milk, Halls, Oreo and Stimorol gum. In addition, Mondelez SA is the custodian of iconic and well-loved local brands such as Chappies bubble gum, Chomp, Lunch Bar and Dentyne chewing gum. The company has a presence in a number of countries in Southern, Central and Eastern Africa where it invests in growing these markets.