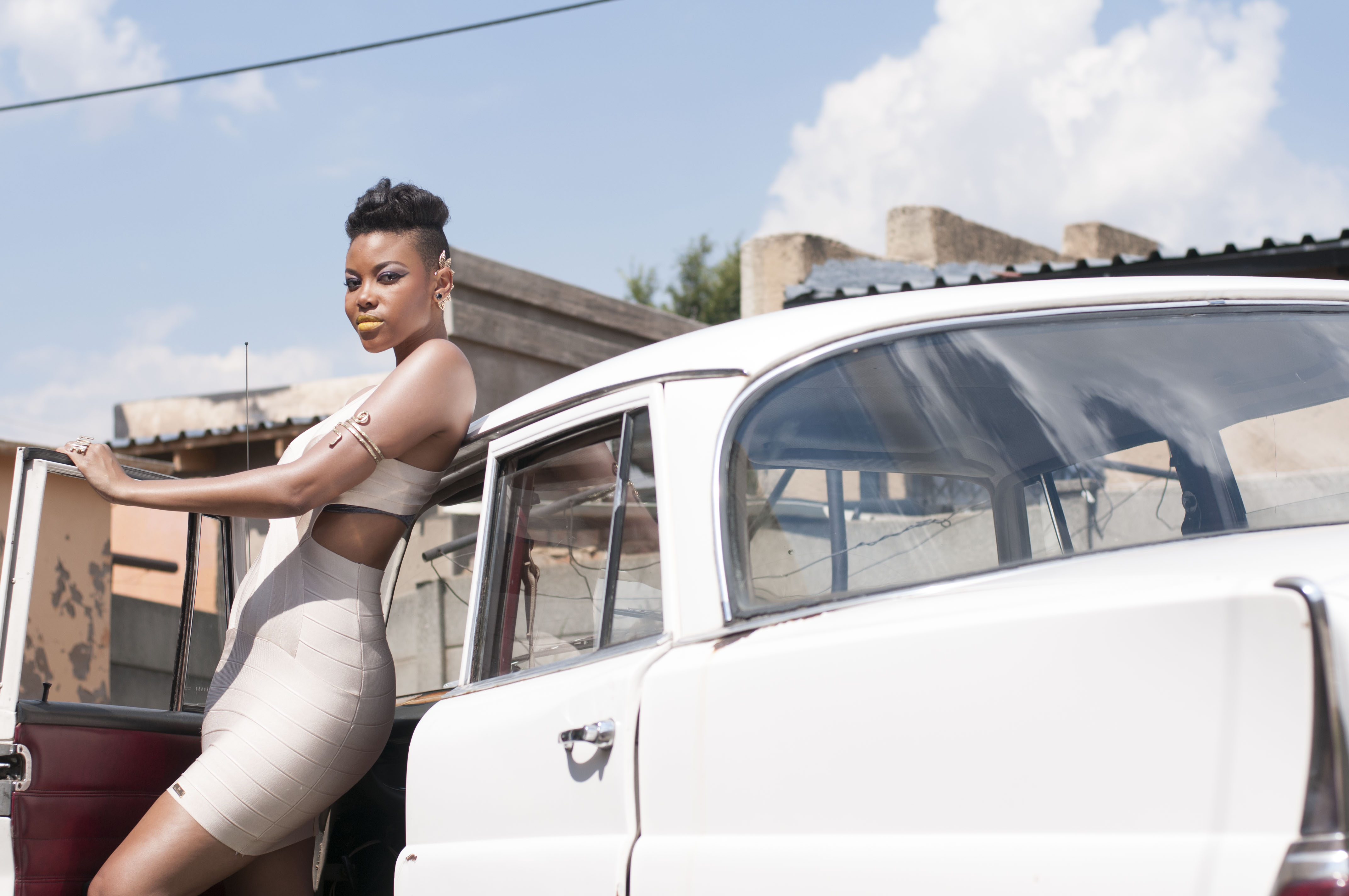 Last year, Luthando Shosha did an interview for a magazine, where she mentioned how much she loves her jobs because she is in the industry that she loves. By then Exclusive Darkness didn’t exist but she indirectly inspired the creation of it. Look at it like this, she interviews people in the music industry, talks about music, goes to really cool events and shares music with people (hmmmm, the similarities hey). Her love for music easily made her a candidate to be interviewed.

Interesting enough is how her career has grown, most of the people we see in the entertainment industry go from TV to radio but Ms Loot Love, keeping to her own style has gone from radio to TV, which makes her the perfect candidate to be the Face of SA Music.

With a fashion style of her own, her unique swag, ever glowing presence, it’s no wonder she is the voice behind SA’s artists being publicly familiar. With love and all over awesomeness, I bring you Luthando ‘Loot Love, King Loot, Loot Thug Shakur, LootGUNS’ Shosha.

1. I’ve wanted to interview you for the longest; you are actually 1 of the most influential people in the South African Music Industry and at the heart of it. How does it feel?

Most influential… haha. I dig that. Thank you. How does it feel? Incredible. There’s nothing quite like being able to influence a movement. I mean I’m still on my way to being a music authority; I still have mad work to put in but… like I said. Feels all kinds of amazing.

2. Being at the heart of the South African Music, what do you love about it as it is and where do you see it going? Or would love to see it headed?

Man! I LOVE the current SA music space. The quality. The brilliant creative space artists are in. The acknowledgement in Old School Kwaito via HipHop. The effort and energy put out into performances. I think SA artists are grasping what entertainment is and putting on real shows. It goes beyond just dropping a single and hoping for the best. It’s an art.

SA HipHop (especially) is in a beautiful space. The variety. The options. The brilliance. The vernac. It’s so refreshing. We’re in the perfect music space, in all genres and the support from South African listeners is growing immensely.

3. You were the host at the South African Music Awards, you are the host of South Africa’s biggest music show, Live Amp and host to the coolest music events, SkyRoomLive. What have been the highlights of your career, especially doing what you love?

Man… Hosting Backstage at both the Metro FM Awards and SAMAs was THEE highlight. I had such an incredible time. It’s insane because the year before, I thought, but “why am I not on that stage? Whether backstage or in front” and the next year it happened at both award ceremonies. What an honour.

Hosting big parties like Spring Day Music explosion is my favourite. Crowds are such a beautiful reminder of why I do what I do. Entertaining people and enhancing their party experience is one amazing feeling. Crowds appreciate your presence so much. It’s unreal.

Of course moving in the same circles as my favourite artists has been dope. My shows are a space where I experience the best in a personal capacity. My own lil “concerts” every week. Cool job aint-it? 😛 Being associated with music, something I can’t live without, is the best feeling. On LiveAmp, on SRL… at festivals. My face is the music face. Nothing beats that.

5. As it’s Woman’s Month, you are 1 of the strongest women in SA, always composed, full of laughs and love. Looking back now which women/ females did you grow up looking up to and listening to? How have they influenced you?

Growing up, my mom and my grandmother were my influences. They are the reason I’m the woman I am today. They have played the biggest roles. They are everything to me.

In terms of television/entertainment I have always appreciated Khanyi Dhlomo and Jo-Anne Strauss. I appreciate women who are composed & exude strength and extreme focus. Women whose work speaks for itself. Women who’ve broken the stereotypes about being beautiful and brainy. Women who you want to listen to.

6. Okay, let’s lighten the mood. Skittles or the Minions?

7. Loot Thug Shakur, so say this is a game character, what would she be like, dressed like, signature move, catch phrase – describe her, please.

Hahaha… She’d be what I’ve seen Farah fortune say she is on twitter a “PitBull in heels”.

She’d maybe dress more lady like but have a mean ride. Her hair would be short. Very short. Shorter than what mine is. She’d be aggressive but still graceful, not an ounce of shy would exist in her. Signature dance move? She’d be able to dance. Period. 🙂 . Catch phrase would be a Lupe Fisaco Lyric: “I’m a part of the problem. The problem is I’m peaceful and I believe in the people.” She’d have a deeper understanding of serving.

8. Well final question, where to from here?

As corny and as typical as this sounds, “watch this space”. I’ve never been a believer in being loud about what I do. You just have to see it for yourself. So keep watching, I, of course will keep giving everyone reason to watch. 🙂

End
So that sums a really cool interview. So much to learn from her, I wonder if a part 2 will happen as she continues to do more but you can always catch her Online on these platforms:
Tumblr – Lootlove
Twitter – Lootlove