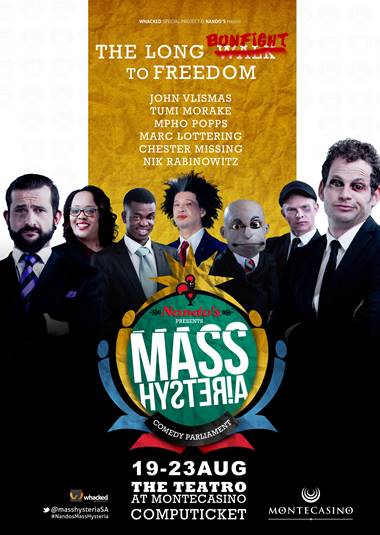 “The Long Bunfight to Freedom”

This year has been witness to the most extraordinary scenes of Parliamentary disorder ever, with fists flying, insults exchanged, mass walkouts and the deployment of SWAT teams in the House. Never before have overalls and berets been at the heart of potential darkness. The nation was astounded that not even load shedding could stop light from being cast on the shenanigans of our elected politicians.

They have accepted bribes, employed inept family and pick-pocketed the taxpayer as he waited for SAPS to pick up the phone. Have we, the people, unwittingly jumped from a frying pan into the fire?

What is the solution? Where will we find relief? Who can we look to for answers?

Nando’s is committed to keeping the heat on those responsible, and even though they don’t profess to have all the answers, they sure know how to turn on the burn.

The burn promises to come in several degrees, from the extra hot spice of John Vlismas, to the lemon and herb stylings of former caveman, Alan Committee; with many, many flavours in between.

Quite simply, if comedy had a government, this would be it. From the makers of “The Comics’ Choice Awards”, “Revelations”, “Bitches” and most other great comedy shows in the country comes the best comedy production of the year.

Look forward to a handpicked line-up of the best stand-ups in the country each night on one, beautifully designed stage. Book now and find out why comedians should be running the country – all proudly presented by the chicken that gets us talking – Nando’s.

*Please note that due to availability Conrad Koch/Chester Missing will be performing for a select number of Cape Town show dates up to 20 October 2015.

Book for either (or both) Johannesburg and Cape Town runs at Computicket (search “Nando’s Mass Hysteria”) as soon as you can, or you will lose out, and your friends will avoid you and it will be awkward.

About Whacked Management
Initially founded to manage the work of John Vlismas, this company has grown from a spare bedroom into three separate divisions: Wh:Agency – a leading booking agency, Wh:Exclusive a talent Management Company and most recently, Wh:Special Project – a prolific producer of premium live comedy events

From the legendary “Comedy Underground” club sessions, to Comedy Central Television Specials, stand-up arena tours and international acts such as Henry Rollins, Whacked is positioned as a substantial contributor to the South African comedy landscape, with an aggressive growth in volume over the last 24 months, and no sign of it slowing.

With the addition of Taffia Keight as the managing partner, a new level of corporate organization has made the business more able to handle diversified talent on a national level.

About Nando’s
Nando’s was established in Rosettenville, South Africa in 1987 and now operates across the globe. We are famous for our Nando’s restaurants, our addictive sauces and our world-famous grocery range. Whether this is your first time touching the fire, or a regular guest, we’ll always be here to fire it up and welcome you with a healthy serving of flame-grilled PERi-PERi chicken of either lemon and herb, medium, hot, extra hot or extra extra hot marinades.

Visit our home at www.nandos.co.za to find your nearest Nando’s and read more about our family.