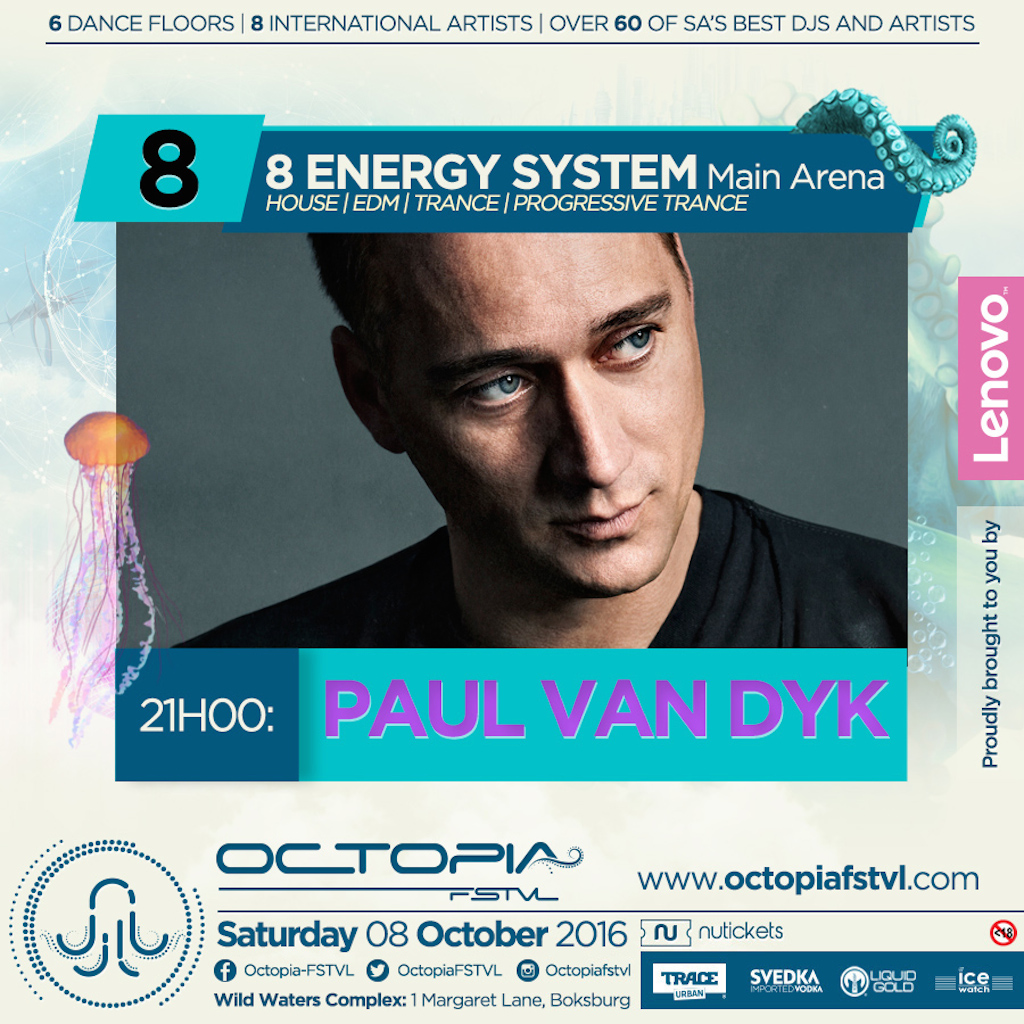 From The Creators of H2O Comes a Brand New Festival, Octopia Fstvl (“Festival”)

Grammy Award nominated German DJ and producer, Paul van Dyk is the event’s main headliner AT OCTOPIA next month. He will be gracing the 8 Energy System – main stage alongside some of SA’s finest talent.

This will be Paul’s first performance in South Africa since 2012. The VANDIT Records Label Boss and Trance Legend has been busy of late. Having released his single ‚BERLINITION in June and a recent remix for WE CAN BE by Chris Bekker and Tricia McTeague. His most recent offering “We Are” (VANDIT) is the new collaboration with fellow trance kingpin, Alex M.O.R.P.H release earlier this month is currently at #1 on Beatport Trance charts.

Each floor presenting a different genre of electronic music.

Octopia FSTVL promises to be an all-day event to remember, with a major focus on production as a team of passionate party creators dive deep into a personal relationship with the element of water to bring you an electronic music festival with a fresh future forward approach to event décor, production, music and expression. The well-known and well-loved party venue – Wild Waters, will transform into a dream-like under water world of magic drawing inspiration from what lies beneath the depths, creating a dreamland of imagination, love, freedom, respect and a common passion for dance!

As brothers Paul & Dave Forbes and partner Itsik Bouhbot, owners and promoters of H2O and Octopia FSTVL, comment: “We are pushing the boundaries with this event and are putting in a lot of effort to create something new and fresh for the SA dance scene, focusing on décor and production for something never seen before! “

The event is brought to you by LENOVO, in association with Svedka, Lovoka Ice Watches & Trace Urban.

Catch the ticket wave now, its rolling in fast!

About OCTOPIA FSTVL
Octopia FSTVL is an electronic music festival with a fresh future forward approach to event décor, production, music and expression, a party paradise for house, hip hop, EDM, techno and trance music lovers. Presented by the H2O team who has pioneered the South African dance scene for the past 20 years. The event will take place at the well-known and well-loved party venue – Wild Waters, in Gauteng.

About Paul van Dyk
One of the most beloved DJ/producers and electronic musicians of this generation, Grammy Award Nominated Paul van Dyk is as respected by his peers as he is revered by fans. As a youth growing up in East Berlin before the fall of the Berlin Wall, van Dyk’s earliest musical influences came from listening to pirate radio and smuggled mixtapes originating from the West. Intoxicated by the forbidden sounds emanating from a world just beyond his grasp, van Dyk would years later be on an unstoppable path towards conquering every earthly continent as a widely admired creator of electronic dance music. His timeless anthems include such classics as, “For An AnPaul van Dykgel,” “The Other Side,” “We’re Alive,” “Tell Me Why (The Riddle),” “Nothing But You,” “I Don’t Deserve You,” “Time of Our Lives,” and many others. With six full-length studio albums and several mix compilations to his name, including the critically acclaimed Politics of Dancing series, van Dyk carves time to program and host his own VONYC Sessions radio show airing on FM and digital radio worldwide each week.

About VANDIT Records
Established in 2000 by Paul van Dyk, VANDIT Records is a leading electronic dance musicrecord label founded on the unwavering principle of artistic integrity. Today, VANDIT remains the “go to” imprint for electronic music connoisseurs. The philosophy of VANDIT follows that of its chief and founder: “No art without artists.”