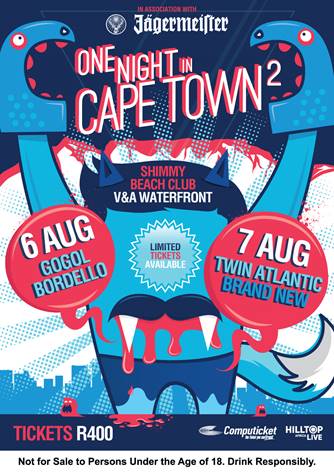 Shimmy Beach Club, Cape Town’s hottest club, is the chosen venue to host this year’s ‘One Night in Cape Town’ concerts on 6 and 7 August 2015, with Oppikoppi announcing international artists Gogol Bordello, Twin Atlantic and Brand New, Shimmy Beach Club is proud to host the events on two separate evenings, instead of one.

As the sun sets over the Mother City, fans of Gogol Bordello can look forward to a stand-alone performance on Thursday 6 August; while alternative rockers Twin Atlantic and Brand New will close down Shimmy Beach Club on Friday 7 August.

A limited number of tickets will be made available for each evening’s performance, with tickets for the 2014 ‘One Night in Cape Town’ selling out weeks before the concert date, fans are encouraged to buy their tickets soon. Fans can experience each band in an intimate setting while still getting the full stadium show.

Brought to you by sponsors Hilltop Live and Jagermeister.

About Gogol Bordello
“We’re not a whimsical band with a whimsical message”. With their uncategorisable blend of international influences, anchored by the gypsy rhythms, Italian flavoured mandolin, a reggae pulse and scorching Russian violin, it’s no surprise that Oppikoppi welcomes, Gogol Bordello.

Formed in 1999, Gogol Bordello have toured endlessly and with their theatrical stage shows made them international headliners. Having released 9 albums in their career, fans of the group can look forward to tracks like ‘Wonderlust Kings’, ‘Movement One: Wearing Purple’, ‘Immigraniada’ as well as tracks off their 2013 album Pura Vida Conspiracy, ‘We Rise Again’ and ‘Dig Deep Enough’. The group believes “if you have true human spirit, you can’t fit into any genre, nationality or culture.”

About Twin Atlantic
Touring shows across Scotland, Europe and America while supporting their idols, My Chemical Romance, Circa Survive, Taking Back Sunday, Blink182, Foo Fighters and even Bruce Springsteen, has solidified the group as one of the mainstream artists in the world.

Formed in 2007, the Scottish group has released 3 albums, and their latest offering has seen the hits ‘Heart and Soul’ and ‘Hold On’ move away punk rock background to addictive, arms-aloft anthems with catchy choruses. Performed for 4 years at both Leeds and Redding festival and confirmed for their 5th year at both.

About Brand New
Although the members of Brand New cut their teeth in various hardcore bands, the group took a more melodic approach to its own work. The band took shape in 2000 around the talents of drummer Brian Lane, vocalist/guitarist Jesse Lacey, bassist Garrett Tierney and guitarist Vin Accardi.

Post hardcore seems like a short sell, but Brand New, has evolved from a pop-punk outfit to the heavier sound that some might call “post hardcore”. Brand New has released 4 albums that have stepped up in a natural progression, that forms the messiest love story you will ever hear. Asking all the right questions and answering it in the next line, with songs such as ”The Boy Who Blocked His Own Shot”, “The Quiet Things That No One Ever Knows”, Sic Transit Gloria”, “Okay I Believe You, But My Tommy Gun Don’t”, “Jaws Theme Swimming”, this has become the gospel of the Brand New fans. Brand New are set to release their first album in 6 years at the end of 2015.