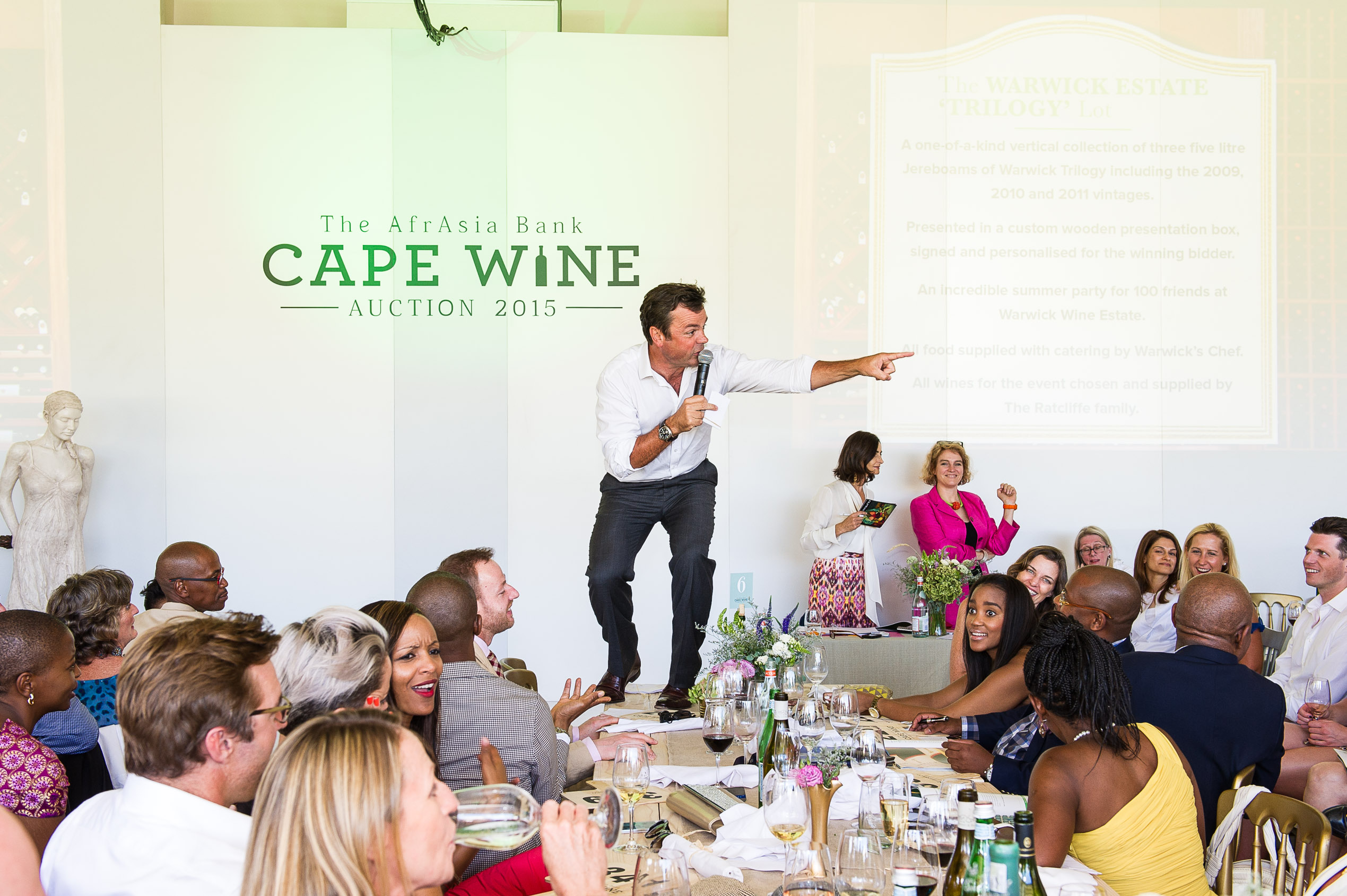 The biggest charity event in South Africa attracts international attention, putting South Africa on the map as a capital of prestigious wine.

The 2016 AfrAsia Bank Cape Wine Auction aims to indulge guests with sensory experiences and an opportunity to support the community, giving them a collection of memories to take back home with them.

For the first time since the auction began, the organisers have opened up an extra day to guests to bid on cases of wine from exclusive individual wine barrels, made from high-end South African winemakers. The Friday night will see guests tasting wines from these specific barrels and bidding on limited offerings. There are 18 wines available for auction, selected to showcase different regions and their signature blends. Guests can look forward to barrels such as a pre-release Klein Constantia Vin de Constance, Shannon’s renowned Mount Bullet, a 2013 Bordeaux Blend made at Glenelly Estate, a 2014 Muscat de Frontignan Natural Sweet produced on Groot Constantia Estate and a 2015 vintage Montpellier clone Chenin Blanc from Adam Mason’s Yardstick Wines.

Saturday features the chance to bid on once-in-a-lifetime experiences with auctioneer Dan Nicholl supported by Metro Fm presenter and hip-hop Dj, Tbo Touch. Guests will get to experience culinary dining in true market style with award winning chefs Peter Tempelhoff and PJ Vadas. A wide range of wine from neighbouring Constantia farms, as well as craft beers, will be available. To top it off, event partner Porsche will provide a luxury shuttle to get VIP guests to the secret venue.

“We are very fortunate to have a strong backing from our trustees and sponsors, who have ensured we have exclusive lots available to bid on, a picturesque location to explore, refined sommeliers on hand and first-rate auctioneers,” says Mike Ratcliffe, Trustee of The AfrAsia Bank Cape Wine Auction Trust and MD of Warwick Wine Estate & Vilafonté.

The AfrAsia Bank Cape Wine Auction has gained attention from South Africa’s finest and the event is expected to see well-known personalities such as Wendy Appelbaum, Cape Town councilor Garreth Bloor and Olympic swimmer Ryk Neethling. There has also been overwhelming interest from international guests and media, putting pioneering South African wineries and wine makers on the map as a capital of high-end wine.

“Every person involved, whether it’s behind the scenes, travelling from afar or contributing to the atmosphere of the auction, has made an impact in keeping this cause alive,” he adds.

The Barrel Auction will take place at a secret location at Constantia Glen from 6pm to 10pm on Friday 12th February and the main Auction will be hosted at Klein Constantia on Saturday 13th February from 11am onwards. The 2016 AfrAsia Bank Cape Wine Auction tickets have been sold out, but people are encourage to go bid online at www.thecapewineauction.com

Trustees, in conjunction with PriceWaterhouseCoopers are responsible for the allocation and monitoring of charitable funds raised as well as high level corporate governance. The purpose of the trustees is to guide the allocation and channeling of funds and to maintain complete transparency in all of the procedures. All funds raised at auction are donated tocharity, without offset or deduction.

About the AfrAsia Bank Cape Wine Auction
Exquisite wines, incredible food and VIP access to some of the most beautiful private locations in the Western Cape. The AfrAsia Bank Cape Wine Auction is not only the chance to buy exceptional, once in a lifetime experiences, but it’s all for a very good cause. Over and above the Auction itself, there is also a Friday night ‘Barrel tasting & Auction’ sponsored by American Express and hosted by Constantia Glen where guests have a chance to taste from 20 hand-selected barrels with the individual winemakers, and then place a bid on a case.

The 2015 AfrAsia Bank Cape Wine Auction, which took place on Saturday 14th February last year ascended to new heights when an astounding R10.565 million was raised for education in the Cape Winelands, achieving a significant 50% increase on the R7.045 million raised at the inaugural 2014 Auction.