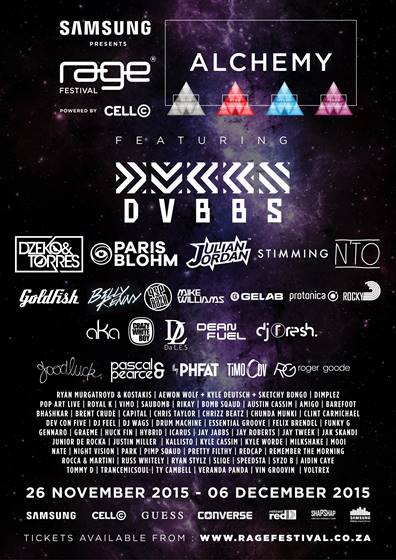 With less than one month standing between you and freedom, the Rage Festival 2015 countdown has officially begun – and with it the announcement of the full #RAGE2015 lineup.

South Africa’s biggest and longest-running youth music and lifestyle festival has secured no less than 11 international DJ’s from across the planet, including Canada, The Netherlands, Germany, Spain and the UK; many of whom will perform in SA for the first time.

You can party to this massive lineup at Rage’s purpose-built festival epicentre – The Sound Factory. Equipped with state-of-the-art sound and production infrastructure across four stages, seamless technology and airtight security, The Sound Factory is the home of Rage Festival.

This year Rage Festival opens The Sound Factory to everyone! Anyone who doesn’t have a Rage Passport and wants to see the incredible international DJ’s live can now buy Day Passes for R300 per night. Get yours here: http://ragefestival.co.za/soundfactory_day_tickets.php

“Samsung is thrilled to be sponsoring Rage once again – the initiative affords students and graduates with an exciting way to celebrate the start of the next phase in their lives. As part of our commitment to the leaders of tomorrow, we are looking forward to making a significant contribution to this festival by creating unique experiences with our range of innovative technologies,” explains Craige Fleischer, Director of Integrated Mobility at Samsung Electronics South Africa. “Samsung smartphones and tablets will be deployed across the event and attendees will be granted access to the venues through the use of Near Field Communication (NFC) enabled wristbands. These cutting-edge wristbands are a great way for the guests to carry essential personal information at the same time as being a stylish accessory.”

“Cell C is proud to be the Powering Sponsor of the 2015 Rage Festival and would like to wish all Matrics an incredible and safe beginning for the next phase in their lives. The unbelievable lineup of top artists that Ragers will enjoy at this year’s festival is proof that anything can happen this summer – all you have to do is Believe.” says Cell C Executive Head of Marketing, Dr. Doug Mattheus.

Need a ride? The comprehensive Rage Rides transport network is essential to your Rage Festival experience. It’s cheaper, safer and easier – and now boasts Rage Rail, a 45-minute party train experience from Ballito to The Sound Factory and back.

Need a room? Space is very limited at Rage Village so book your bed now: http://ragefestival.co.za/rage_village_book.php

Still don’t have your Passport? Really? Black and Platinum Passports are SOLD OUT, but Regular and Reunion are still available. Rage Passports available exclusively at www.ragefestival.co.za.