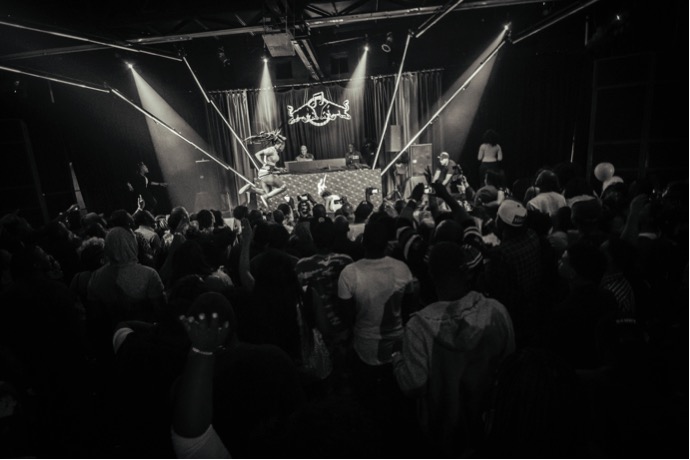 Spread across 4 venues, the second day of Red Bull Music Academy Weekender featured a lineup packed with some of the finest local acts from across the music spectrum. With Carfax, And Club, Great Dane and Kitchener’s playing host to the night’s activities, each with its own atmosphere, there was something for everyone.

For lovers of Techno, And Club was the place to be. It saw big names like GForce & Craig Placid, Fabio & Grant VR and Kanan K7 & Dogstarr playing back to back, with their driving and deep techno sets locking the dance floor into the hypnotic rhythms well into the early morning.

At Carfax a number of genres were represented. A33, Mr Green, Rudeone and Niskerone vs Hyphen brought the fast-paced, relentless rhythms of drum ‘n bass, while Das Kapital held down the fort for dance music. On the more commercial side, Sketchy Bongo & Aewon Wolf‘s set shifted gears towards their radio hits and singles, among them many crowd favourites.

Great Dane was jam-packed with people ready for a night of big beats. From the eclectic and varied sets of Davina Satori and Maramza, to the live electronic music of Leeu, Behr and Felix Laband, epic hip hop sets courtesy of the Uppercut crew and Themba Lunacy and a stellar performance by kwaito/house legend Thebe, which had the whole venue moving.

Kitchener’s also featured a variety of artists including the digital maskandi of Mashayabhuqe, live hip hop meets jazz guitar courtesy of Beat Sampras, high-energy dj sets from Jakobsnake and Kenzhero, with Jazzuelle featuring the Lazarusman and Jumping Back Slash bringing the deeper sounds of house music. Closing up the night was gqom legend DJ Lag whose driving, bass-heavy music infected the dance floor.

Today sees Red Bull Music Academy Weekender moving to 1 Fox in Newtown. With international headliners Fat Freddy’s Drop and Patoranking performing alongside local greats such as Moonchild Sanelly, AKA and Kid Fonque, it is bound to be another night packed with top performances and music.