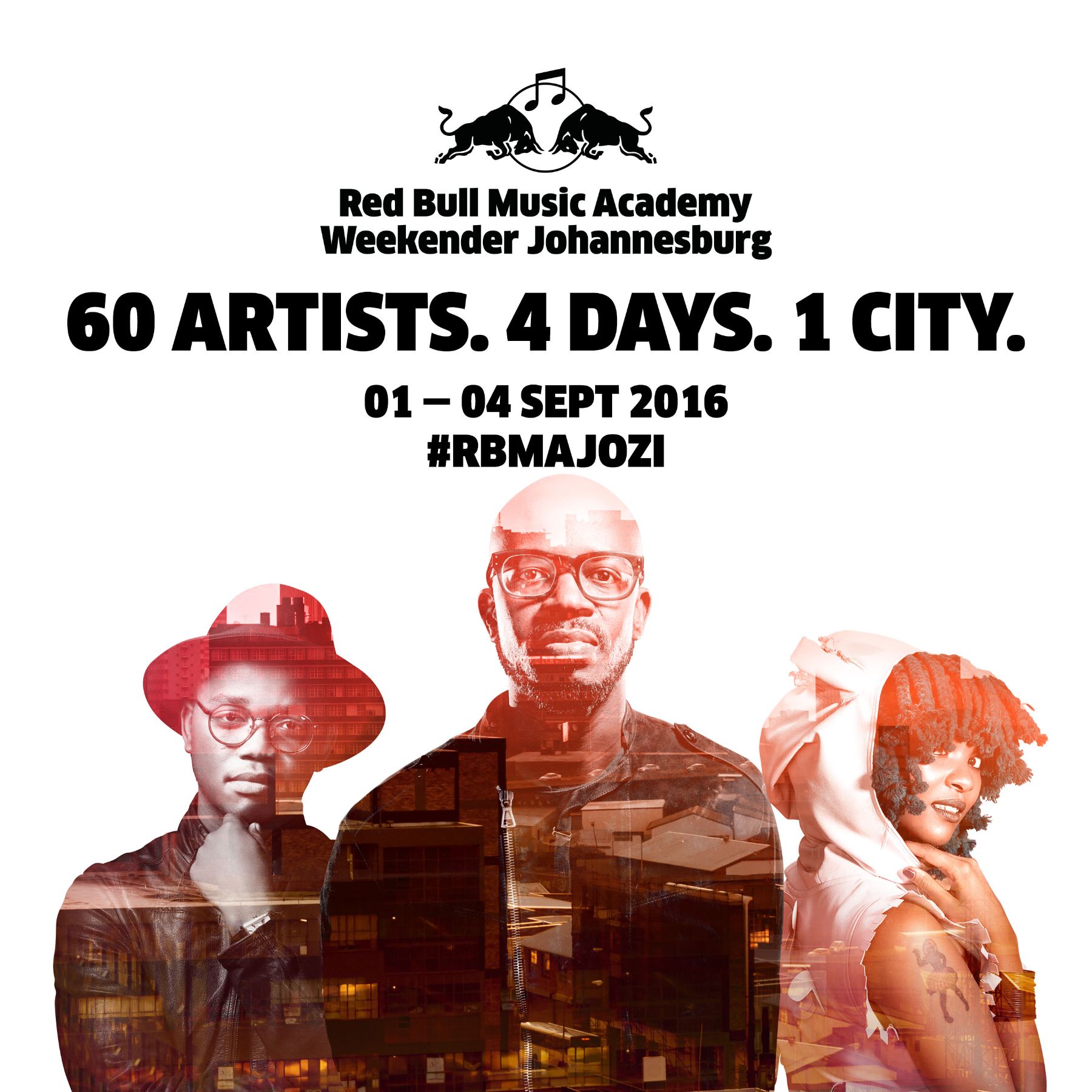 Having travelled the world for nearly 20 years and collaborated with more than 1,500 musical luminaries, the Red Bull Music Academy Weekender comes to South Africa – and Africa – for the very first time. Taking place from Thursday the 1st to Sunday the 4th September 2016, the South African RBMA Weekender will host no less than 60 acts from across the country, continent and world, covering a range of genres from hip hop and ragga to electronica and house music.

The lineup will play across six iconic music venues in and around downtown Johannesburg, including Bassline, 1 Fox, And Club, Kitcheners, Carfaxx, Great Dane and Zone 6. Each event, from day to night, will offer a mix of sounds and festival-goers can expect to be taken on different musical journeys over the four days.

It all begins on Thursday at the legendary Bassline in Newtown, to many a home of the Johannesburg music scene. Bassline has been hosting incredible musicians for more than two decades, and on Thursday it will host the RBMA Weekender’s reggae night, featuring masters of the sound African Storm Sound System with Admiral and Jahseed and special guests.

Braamfontein and Newtown’s cultural melting pot of music, fashion, culture and style is the perfect playground for Friday night as we move the party to legendary venues And Club, Kitchener’s, Carfaxx and Great Dane. A power lineup of Thebe, Felix Laband, Beat Sampras, Niskerone vs Hyphen, Kenzhero, G Force & Craig Placid, Sketchy Bongo and Aewon Wolf and many more will drop beats, bass, techno and everything in between until the early hours. All centrally located and close to each other, festival-goers can move easily between venues and stages for over eight hours of non-stop music.

The pinnacle of the RBMA Weekender programme takes place Saturday night on 3rd September at 1 Fox in downtown Joburg, where New Zealand natives and global sensations Fat Freddy’s Drop will headline. Fat Freddy’s Drop are a seven-piece band from Wellington whose musical style has been characterised as any combination of dub, reggae, soul, jazz, rhythm and blues, and techno. AKA, Nigeria’s Patoranking, Christian Tiger School and Jullian Gomes, among others, will keep the crowds humming until 2 AM.

Sundays are where it’s at in Joburg’s biggest township, and on 4th September, the RBMA Weekender moves to Zone 6 in Soweto. Kicking off at 3 PM, audiences can look forward to phenomenal live performances from Black Coffee, Culoe De Song, Riky Rick, Oskido, King Bruce, and Mafia Boyz.

Chopper Reeds, aka Scott Towers, of Fat Freddy’s Drop says he and the band are excited to be playing in South Africa for the first time. “Fans can look forward to some Fat Freddy’s Drop classics as this’ll be the first time we’ve performed them in South Africa. And some box fresh vibes as we’ll be fighting fit after a four-week European tour just prior to the RBMA Weekender,” says Chopper Reeds.

While in the country, the band also plans to see the sights and hook up with some of the local heavyweights like Black Coffee.

A full weekend programme will compliment and amplify the music experiences. These include a series of workshops, installations and collaborations between musicians and industry talent focusing on African music, culture and sounds. The programme will be released soon on http://redbull.co.za/RBMAWeekenderJozi.

Anyone who pre-registered will receive an SMS detailing how you can secure your tickets.
Visit http://redbull.co.za/RBMAWeekenderJozi to buy your tickets and sign up for news and updates.

About Red Bull Music Academy
The 18th edition of the Red Bull Music Academy will take place in Montreal in 2016, bringing together 70 carefully selected producers, vocalists, beatmakers, instrumentalists and DJs. The group is invited to attend intimate lecture sessions and collaborate on music in an expansive, custom-fitted complex of creative and studio spaces.

The Red Bull Music Academy is already an established institution in South Africa, having helped to foster the creative development of globally recognized artists like Black Coffee, Jullian Gomes and Culoe De Song.

Plenty other Academy alumni have gone on to become true figureheads of their scenes, like electronic music innovator Flying Lotus; Hudson Mohawke, the Scottish producer behind the beats of Drake and Kanye West; Russian DJ, producer and label head Nina Kraviz; LA soul singer Aloe Blacc; Mexico’s Grammy Award-winning singer/songwriter Natalia Lafourcade; and Katy B, who introduced the mainstream to the sounds of UK funky.

The Red Bull Music Academy has been pairing music legends and emerging beatsmiths since 1998 in cities such as Berlin, Cape Town, Melbourne, Barcelona, São Paulo, London, New York City and Tokyo. This unique combination of old-school knowledge and new school sounds is unrivalled for its creative exploration and achievement. Each yearly Academy edition leaves behind structures to encourage musical collaboration and creative exchange for years to come. Currently there are eleven fully equipped Red Bull Studios around the world.